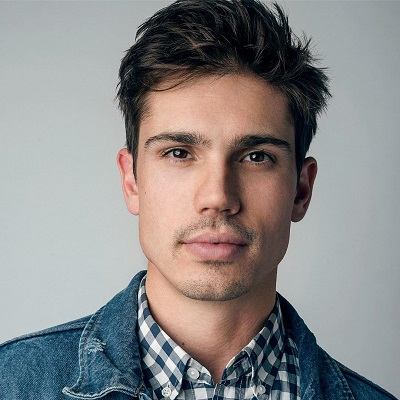 Tanner Novlan is a married man. His wife, Kayla Ewell is also a TV actress by profession.

In May 2015, the couple got engaged to each other. Later, they exchanged vows on the 12th of September 2015. The wedding took place at the Jonathan Club in Los Angeles in front of 200 closest family and friends. The ceremony was officiated by Ewell’s uncle.

Who is Tanner Novlan?

American Tanner Novlan is an actor. He is renowned as Gregory Manes of Roswell, New Mexico, and Zack Russell of Letterkenny.

Last, in 2020, he appeared in the series, The Bold and the Beautiful as Dr. John Finnegan.

In the future, this actor will make his appearance in the series, Puckheads as Mike Murphy.

Tanner Novlan was born on the 9th of April 1985 in the United States. He is of British-Irish ethnicity. As of July 2020, he is 35 years old. Also, his zodiac sign is Aries.

Till the date, he has not shared any details on his family background including father, mother, and siblings. Also, details on academics are behind the curtains.

In 2009, Tanner Novlan started his career as an actor with the movie, Maneater. In the movie, he portrayed the character of Roger Raintree. The following year, he appeared in some minor projects including the series, Bones and video, Sick Puppies: Maybe.

Moving forwards, in 2016, he featured the movie, Flatbush Luck. In the crime-drama, he played the lead character of Jimmy. In the movie, he shared the screen with the actors like Natalie Britton, Miles Mussenden, and Robby Stahl. For the movie, he was nominated for FilmOut Audience Awards and Festival Award as the best actor.

The same year, he appeared in the series, Mohawk Girls as Midas. The next year, in 2017, he featured the movie, Fallen Stars as Ben.

As of now, the actor is exploring his career as a TV actor. In 2020, he appeared in the two TV series. That includes The Bold and the Beautiful and Roswell, New Mexico.

Currently, he is busy filming for the movie, Puckheads as Mike

Apart from acting, he also makes through his TV commercials ads and music videos too.

Talking about net worth, his wife, Kayla has an estimated net worth of $2 million. Her net worth is attributed to her acting career.

As of now, he has managed to remain his dignity as an actor. Till the date, he has not been involved in any kind of controversy and scandals that created headlines in the media.

Tanner Novlan has black eyes with black hair. He stands at a height of 6 feet 1 inch has an average weight.

Talking about his appearance, he has sharp looks with an oval-shaped facial structure with defined jawlines. Also, he prefers to have a slightly grown mustache.

You may also read the bio of Max Walker, Joshua Bassett, and Spencer Garrett.