Taron Egerton is a famous Welsh actor. He is in a relationship.

The Welsh actor, Taron Egerton is an unmarried man. Currently, he is dating the British Producer Emily Thomas. The couple began dating since November 2016 and are still together. They have been maintaining a sound relationship with them.

Taron usually doesn’t speak about his personal life and there is not even a single rumor of his past relationship. Furthermore, he has never been involved in any affairs. As of now, Taron and Emily are enjoying their love life and living elegantly. 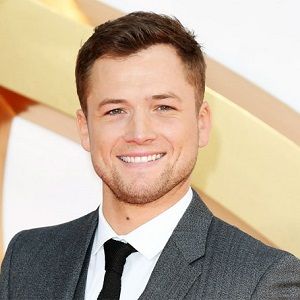 There are some parts of my life that are wonderful, and it's amazing to get to go to cool events and award shows and things like that, but I think the outside perception is that your life just changes overnight and you wear Dolce and Gabanna suits and drive a Mercedes. But life's just not like that.

I think being busy is a healthy thing.

Who is Taron Egerton?

Taron Egerton is a famous Welsh actor. He rose to prominence after appearing in the British television series The Smoke followed by the 2014 action comedy film Kingsman: The Secret Service.

Furthermore, he has won the Empire Award in the category of Best Male Newcomer for Kingsman: The Secret Service. In addition, he has also played in a couple of hit films such as Kingsman: The Golden Circle, Love at First Sight, and Eddie the Eagle.

Taron was born on November 10, 1989, in Birkenhead, Cheshire, England, UK. Details about his parents and siblings are not disclosed. Moving towards his nationality, he is Welsh and his ethnicity is English, Welsh, Irish. From the beginning of his childhood, he had a keen interest in acting and also began to learn from a very early age.

Concerning in his education, Taron attended Ysgol Penglais School. Later, he completed his graduation with a BA Honors Acting from the Royal Academy of Dramatic Art.

Taron began his acting career in 2011 from the ITV series Lewis as Liam Jay in two episodes. Later in 2014, he appeared in the Sky1 series The Smoke as the main cast member.

Additionally, this Welsh actor landed the famous role of Eggsy is the Kingsman sequel named, Kingsman: The Golden Circle in 2017. Prior to that, Taron also starred in a couple of films such as Sing, Love at First Sight, Eddie the Eagle, and Legend. Besides this, he has also played in the theater The Last of the Hausmanns in 2012. In addition, Taron was in the GQ’s top 50 best-dressed British men in 2015 and 2016.

So far, he has won the Empire Award in the category of Best Male Newcomer for Kingsman: The Secret Service. Apart from that, Taron also got a couple of nominations such as the Rising Star Award, Saturn Award, and a couple of Teen Choice Award.

He will soon feature in his upcoming  American action-adventure film directed by Otto Bathurst which is based on the tale of Robin Hood and will be released on November 21, 2018.

Being a famous actor, he earns a decent amount of money from his profession. Currently, he has a net worth of $6 million as of 2022.

On the movie, Kingsman: The Golden Circle, Taron was in the headline of the controversy for his sex scene. Besides this, there are not any rumors regarding his personal and professional life.

Taron Egerton has a height of 5 ft 10 inches and weighs 79 kg. Moreover, he has a pair of attractive blue eyes and lights brown hair. Besides this, there is not any information regarding his other body measurements.