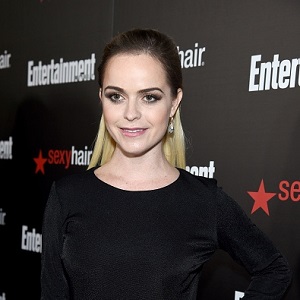 As a brother and sister, our tastes were pretty different growing up. He liked a lot of early hip hop. My dad didn't understand it and would try to talk him out of it

There's definitely a whole different vibe on the set when there's like basically royalty working with us. We could have whatever we wanted. I felt like Britney Spears

Taryn Manning is current marital status is unmarried. She was dating Clifton Collins Jr. for nine years on and off from 2002 to 2011.

Then, she dated Jeanine Heller in between 2013 and 2014. There is no information of her divorce and children.

Who is Taryn Manning?

Taryn Manning is an American actress, singer-songwriter, and fashion designer. Manning made her film debut in the teen drama Crazy/Beautiful (2001), followed by a lead part opposite Britney Spears in Crossroads. As a musician, Manning is the vocalist for the electronic duo Boomkat and is also a co-owner of the clothing brand Born Unicorn.

Taryn Manning was born in Falls Church, Virginia on November 6, 1978. Her nationality is American and ethnicity is mixed(Irish, German, English, French).

She is the daughter of Bill Manning(father) a musician and his wife Sharyn Louise(mother). Manning’s parents divorced when she was two months old and her brother Kellin.

She was raised by their mother in Tucson, Arizona. Manning grew up living in a trailer park with her brother and single mother, who supported the family on a strict income.

In spite of the family’s money trouble, her mother was able to enroll Manning in karate, dance, and acting classes. At the age of 12, her family relocated to San Diego, California.

Two years later, when Manning was 14 her father committed suicide. As a teenager, she worked as a waitress and a barista to help support her family.

Taryn Manning moved on to build her career as a Singer/Songwriter and actress. Manning began acting in the late 1990s, appearing in small roles in several film and television productions and arriving in such film projects as 8 Mile, White Oleander, Crossroads, and Hustle & Flow. Having made many TV appearances over the years as well, Manning ultimately landed in Orange Is the New Black, the acclaimed Netflix dreamed.

In 2003, Manning and her brother Kellin formed the band Boomkat. The band first signed a major label deal with American Idol producer Randy Jackson, but the deal fell. Robbie Robertson then signed them to DreamWorks Records, which was Bookkat’s label from 2002 to 2004. On March 3, 2009, their official first single “Run Boy” was released along with a visually electric music video. In September 2009, Manning stated that she is working on a solo album. Her single with Bynon “All The Way” was released January 12, 2015. Manning posed nude for Playboy in the April 2011 issue of the magazine.

Taryn Manning: Salary and Net Worth

According to rumors, Taryn Manning is the latest to receive a host of comments from fans. Manning was recently accused of attacking her makeup artist “Holly Hartman”.


Taryn has a height of 5 feet 2 inches. Her body weighs 53kg. She has blonde hair and green eyes. Furthermore, her body measurements are 34-25-33 inches. Besides these, her bra size is 32B, the dress size is 6 US and her shoe size is also 6 US.