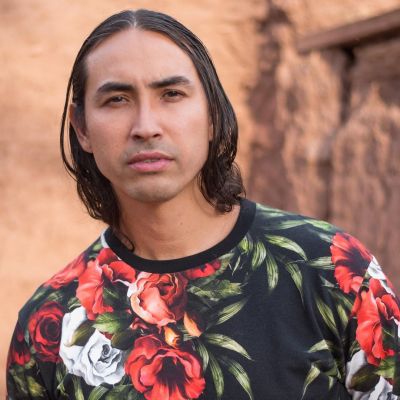 Tatanka Means is living a blissful conjugal life. He is married to a yoga instructor, Christine Means. The couple is blessed with a daughter.

Further, there is not much known about his marriage life.

Who is Tatanka Means?

Tatanka Means is an actor, activist, boxer, comedian, and entrepreneur from the United States. He is best known for his roles in Saints & Strangers and Tiger Eyes.

He is the son of activist and actor Russell Means (father) and Gloria Means (mother). In 1970, his father was one of the leaders of the American Indian Movement. Sadly, his father passed away on October 22, 2012.

He has seven siblings including Nataanii Nez Means and Scott Means. His academic background is under the curtains at the moment.

He holds an American nationality whereas his ethnicity is unknown at the moment.

In 2004, Tatanka made his first screen appearance as a lead stunt double in the film Black Cloud. The following year, he was cast in the role of Crazy Horse in the miniseries, Into the West.

In 2012, he played the role of Buddy Begay, a “hip-hop Navajo fry-bread rock star” in More than Frybread. The same year, he appeared in the role of Wolf Ortiz, in Tiger Eyes, based on the novel by Judy Blume.

In 2015, he starred in the television movie Saints & Strangers aired on the National Geographical Channel where he portrayed the role of Hobbamock, an elite Pokanoket.

Similarly, he starred in the role of “Delvin” in Neither Wolf Nor Dog and “Charges the Enemy” in The Son. Furthermore, his other notable movies are The Burrowers, Sedona, The Host, The Night Shift, Graves, and more.

Aside from acting, he is a professional stand-up comedian. He performs with the group 49 Laughs Comedy, Pax Harvey, James Junes, Ernie Tsosie ii, and Adrianne Chalepah.

Means is also an entrepreneur and was awarded the American Indian Business Leaders (AIBL) Entrepreneur of the year award in 2011.

Tatanka might have accumulated an impressive amount of wealth throughout his successful career. However, he hasn’t yet revealed his exact net worth, salary, and other earnings in the media.

The actor has managed to maintain a clean profile. To date, he hasn’t been part of any sorts of rumors and controversy that create a huge buzz in the media.

The actor has a towering height. He stands at the height of 6 feet 2 inches tall. Likely, he has a black pair of eyes and as well black hair color.

He is also active on Facebook with 62k followers.