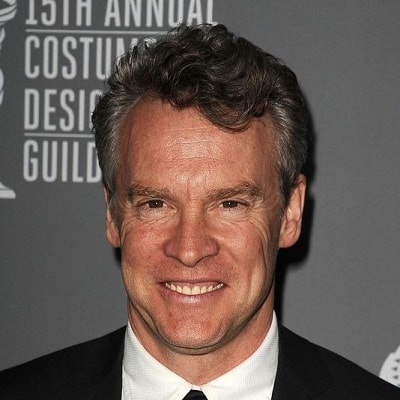 When I told everybody I was doing Hercules (1997), they felt really sorry for me. They thought I was so down on my luck that I was having to do extra work on the TV series Hercules: The Legendary Journeys (1995).

[on his film Love Potion No. 9 (1992)) It's a movie about that one true love everyone is supposed to have. But I don't know if I believe in that.

Previously, he dated Sandra Bullock (actress, producer, and philanthropist) in 1990, and the pair dated till 1994. After that, he was engaged to actress Jennifer Aniston from 1995 to 1998. Then, he married Corinne Kingsbury on November 26, 2005.

The wedding ceremony was held in Malibu, California. But the couple could not hold the relationship and end with divorce in 2008. After that, he has not been linked with any other.

Who is Tate Donovan?

Tate Donovan is a famous American actor and director. He is best known for his role as Tom Shayes in ‘Damages’. Also, he is famous for his performance as Jimmy Cooper in ‘The O.C.’

He was born on September 25, 1963, in Tenafly, New Jersey, USA. His birth name is Tate Buckley Donovan. He was born to father John Timothy Donovan and mother Eileen Frances.

His father is a surgeon. His parents are both Roman Catholics of Irish descent. He has six siblings and he is the youngest one of all, however, there is no information about the names of his brothers and sisters.

Donovan holds American citizenship but his ethnicity is a mix of Irish and German.

He joined Dwight-Englewood School in Englewood, New Jersey, and then transferred to Tenafly High School. After that, he joined the University of Southern California.

Moreover, he gave his voice of the title character in the Disney animated film ‘Hercules’. Also, he portrayed the supporting role of the Oscar-winning film ‘Argo’ in 2012.

Likewise, he made his appearance in numerous productions at the Williamstown Theater Festival and also appeared at the Irish Repertory Theater in New York City. He is also active in the musical field. He released an album titled ‘Wake Amusements’.

He won Primetime Emmy in the category Outstanding Short-Format Nonfiction Program for ’30 for 30 Shorts’ in 2014. Also, he was nominated for Gold Derby Award in the category Ensemble Cast for ‘Manchester by the Sea’ in 2017.

Tate does not like to harm other persons and has not been involved in any rumors and controversies in his personal and professional life.

Tate Donovan has a height of 6 feet and he has dark brown eyes and dark brown hair. Other information regarding Donovan’s weight, shoe size, dress size, etc. are unknown.