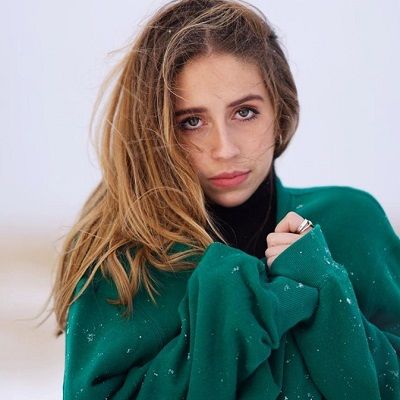 What is the relationship of Tate McRae?

She has a pet dog named, Theo.

Who is Tate McRae?

Tate McRae is a Canadian dancer, actress, and singer. She has also voiced in movies and has her own YouTube channel which was created in May 2011.

She competed in So You Think You Can Dance at the age of 13 only. There she earned the title of the first Canadian finalist.

She has an older brother named Tucker McRae and holds Caucasian ethnicity.

Regarding her educational background of her, she attended the dance school Alberta Ballet School.

She has also attended a two-week program at Berlin State Ballet School. At present, she is enrolled in Western Canada High School.

Tate McRae has an amazing voice. Her song One Day was loved by the listeners and was a hit.

She has released her first EP, All the Things I Never Said in Jan 2020. This EP was brought by RCA Records and contains singles like Stupid, Vicious, and more.

She has also competed in So You Think You Can Dance: The Next Generation in 2015 and came in third place.

Tate McRae is doing great with her professional and personal life. Till now, she has not been in any controversy or rumors.

Talking about earnings, this dancer has an estimated net worth is $2 million as of 2022.

Talking about Tate McRae’s body features, she has dark brown eyes and blonde hair. She stands with a height of 5 feet 6 inches and weighs 59 kg.

Tate is active on social networking sites but not on Facebook.

Moreover, she is very popular in TikTok and has more than 779.1k fans. She has also a YouTube channel with around 2.32m subscribers.

You may also like to read Caleb Coffee, Ashlay Soto, and Liana Jade Brooker.