Primetime Emmy Award winner Tatiana Maslany is having an affair with her co-star. 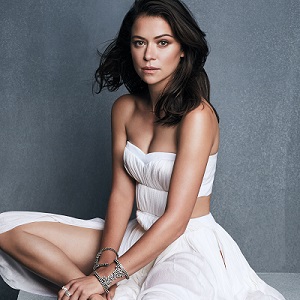 Trust your gut. You know yourself, so don't let somebody else tell you who you are

I try to get roles that challenge me in what I can do and who I think I can portray. For me, it's about creating characters with really fascinating stories, because that's what I like to watch on TV.

Tatiana Maslany has been dating Welsh actor Tom Cullen since 2011. The two first met in Budapest while they were filming the Channel 4 miniseries World Without End.

They live together in Toronto, Ontario, Canada at the present. They are not yet married. Other than this, there is no much significant information regarding the relationship history and facts of the beautiful and talented actress Tatiana Maslany.

Who is Tatiana Maslany?

Her other notable films are Diary of the Dead and Eastern Promises, the latter of which she narrated.

Maslany was born Tatiana Gabriele Maslany on September 22, 1985, in Regina, Saskatchewan, Canada. Maslany is of mixed(Austrian, German, Polish, Romanian, and Ukrainian) ethnicity and his nationality is Canadian.

She is the daughter of Dan(father) and Renate Maslany(mother). She has two younger brothers namely Daniel and Michael.

Additionally, her grandparents spoke German. Apart from that, she also speaks some Spanish. She began dancing at 4 and started community theatre & musicals at 9.

After completing high school, she spent some time doing theatre performances & traveling before settling in Toronto at 20.

Tatiana Maslany was first seen in 200 in Incredible Story Studio (TV Series). She was also one of the stars of the 2002 Canadian TV series 2030 CE.

Maslany went on to appear as the character Ghost in the 2004 film Ginger Snaps 2: Unleashed. Then, she performed comedic improvisation for 10 years.

She participated in improvisational theatre, including the Canadian Improv Games, and has since become a member of the General Fools Improvisational Theatre. Maslany is now a certified improvisation trainer.

In 2007, she appeared in The Messengers as Lindsay Rollins. She also starred in the series Heartland, playing a barrel racer, Kit Bailey. During 2008, she had a recurring role in the TV series Instant Star.

She had a lead role in the movie, An Old Fashioned Thanksgiving. In September that year, she portrayed Penny, a kidnapping victim in the Canadian series Flashpoint.

Maslany appeared as Sarah Wexler in the second season of the Canadian comedy-drama TV series Being Erica in 2010. That same year, she appeared as the protagonist Mary, the mother of Jesus, in the British 4-part television series The Nativity.

In 2010, she appeared in the direct-to-video film Hardwired. Next year in late 2011, she co-starred in the film adaptation of Certain Prey in the role of a contract killer named Clara Rinker.

Maslany has featured in the TV series Orphan Black, playing the lead character, Sarah Manning, as well as Sarah’s cohort of clones.

She was again nominated in 2016 & won the category. Maslany received a nomination for Best Lead Actress in a Drama Series at the 7th Critics’ Choice Television Awards, her third total nomination from the Broadcast Television Journalists Association.

While her salary is not known, she has a net worth of around $3 million.

There are no many significant rumors and controversies regarding Tatiana to date. She has thus, managed to keep her image clean in the eyes of the general public.

Tatiana Maslany has a height of 5 feet 4 inches. Her body weighs 54kg. She has dark brown hair and hazel eyes. Further, her bra size is 32B, her shoe size is 7.5US and her dress size is 4US.