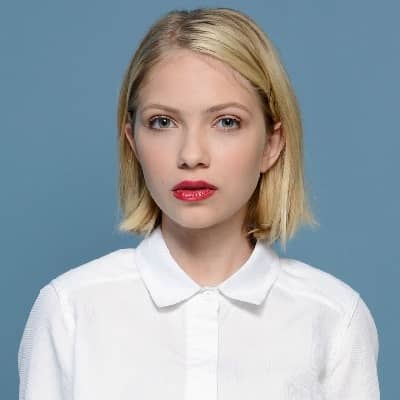 Previously, she declared that she was in a relationship for a long time. The couple first knew each other while they were students at the college. Though she hasn’t revealed his name,

After she broke up with her college boyfriend, she went to New York.

Who is Tavi Gevinson?

She came to public attention at her young age from her fashion blog Style Rookie. She founded The rookie Magazine when she was just 15.

Further, she was also honored one of the 25 Influential Teen of 2014 by Time Magazine.

Tavi was born on April 21, 1996, in Chicago, Illinois. She grew up in the suburban town of Oak Park, Illinois along with her sisters, Rivkah Gevinson and Miriam Gevinson.

Her father, Steve Gevinson was born to an Orthodox Jewish family. He is a retired English high school teacher. Likely, her mother, Berit Engen was raised as Lutheran but converted to Judaism later. She is a weaver and part-time Hebrew instructor.

Gevinson holds an American nationality and is of mixed (Ashkenazi Jewish and Norwegian) ethnicity.

Talking about her education, she completed her schooling from Oak Park and River Forest High School in Illinois. Then she attended New York University after a couple of years of gap.

Tavi Gevinson was just 12 yrs old when she started a fashion blog, Style Rookie. That blog featured various photos if under 10 old on the latest fashion trends.

She gains popularity after appearing in the magazine and was invited to attend Paris Fashion Week and New York Fashion Week. She also appears in an interview by The New York Times for an article about young bloggers.

In early 2011, Gavinson decided to stop writing primarily about fashion and she later founded Rookie Magazine. The website focuses on issues impacting teenage girls and content is also written by teenage girls.

She has also worked for Fashion Week and Magazine.  n November 2018, Gevinson announced that she would be shutting down Rookie due to the site no longer being financially sustainable.

Gevinson first appeared in a short film, First Bass, in 2008. She later featured in the 2013 film, Enough Said. The film was filmed in Los Angeles on a budget of $8 million and it grossed a box office collection of $25.3 million.

Apart from her acting, Gevinson also made her appearances in several TV series. She dubbed as Queen of the Millennials, in MSNBC chat show So Popular!, hosted by Janet Mock. She then appeared on The Nightly Show with Larry Wilmore on a panel critiquing, Sean Penns Rolling Stone interview with EI Chapo.

During the 2012 U.S. presidential campaign, Tavi supported the Democratic candidate Barack Obama appearing in a public service announcement for women’s rights, mouthing the words to Lesley Gore’s “You Don’t Own Me”.

She also organized a get-well-soon-card drive for Malala Yousafzai.

Gevinson also speaks at TEDxTeen, with a focus on the representation of women in popular culture. Her talks and videos are appreciated bu many people and also a lot of popular personalities.

She has also spoken at The Economist’s World in 2012 Festival. She is also a contributing editor at Garage magazine.

this actress has built a successful career with a net worth of around $7 million.

She currently resides in her home at 35 stored building, 300 Ashland, in Fort Greene. A bedroom in her building rents at $3500.

The actress has solely focused on her career and avoids any media rumors and controversies.

Tavi Gevinson stands with a height of 5 ft 1 inch and has a decent weight. She has brown dyes into blonde colored hair and hazel colored eyes.

Also, get to know about Lou Doillon, Erik Compton, and Rosa van Iterson.