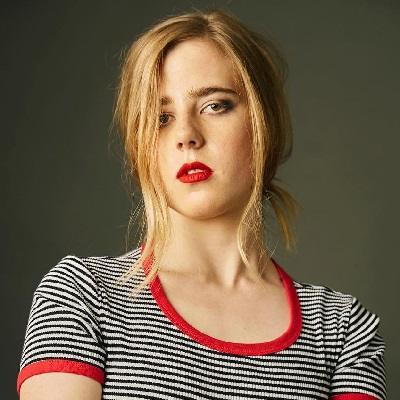 Taylor Cranston’s current relationship status is possibly single. Till the date, she has not shared any details about her dating history and partner.

Also, she shares a very strong bond with her friend, Lexi Klein since her childhood.

Her Instagram post suggests that she has a soft corner for dogs in her hearts and loves to spend her free time with them.

Who is Taylor Dearden?

American Taylor Dearden is an actress and producer. She is renowned as Ophelia Mayer of the series, Sweet/Vicious.

Next, she will appear in the family drama film, The Last Champion as Joanna Miller.

Also, her next series, To Whom It May Concern is in the stage of the pre-production.

Taylor Dearden was born on the 12th of February 1993 in Los Angeles, California to a showbiz family. She is of British-Scottish ethnicity. His birth name is Taylor Dearden Cranston.

His father, Bryan Cranston is a veteran actor, director, and producer. Also, his mother, Robin Gale Dearden is an actress by profession.

Apart from his parents, his grandfather, Joe Cranston, and uncle, Kyle Edward Cranston are actors.

Talking about the educational background, in 2015, she earned his bachelors’ degree from the University of Southern California with Honors in Arts.

Growing up as a child, Taylor Dearden’s parents had a great influence on her that lead her to pursue acting as her career. She professionally started her career in 2010 as an actress with the series, Breaking Bad in a minor role as a sad-faced girl.

After the series, he appeared in numerous short movies including Calling, Red Handed, and The Fourth Wall. Moving forwards, he started featuring the TV series with the series, 101 Ways to Get Rejected.

After that, he appeared as Ophelia Mayer in the series, Sweet/Vicious. The series became one of the most successful series of her career.

In 2017, she debuted in the movies with the movie, the romantic-drama, Heartthrob as Cleo. In the movie, she shared the screen with the actors Aubrey Peeples, Keir Gilchrist, and Peter Facinelli.

Later, in 2018, she featured the Netflix series, American Vandal as Chloe Lyman. The comedy-drama also nominated for Primetime Emmy Awards too.

Through her entertainment career, she has made a net worth of $500 thousand. As an actress, her earnings are in the range of $20k to $214k. Apart from that, she also makes through his production works too.

Talking about the net worth, his father, Bryan has an estimated net worth of $40 million. Per episode, he charges around $225 thousand for the TV series.

As of now, she has not been through any sort of controversy that created headlines in the media. Also, she has managed to be far from rumors too.

Taylor Dearden has brown eyes with blonde hair. She stands at a height of 5 feet 5 inches and weighs around 50 kg.