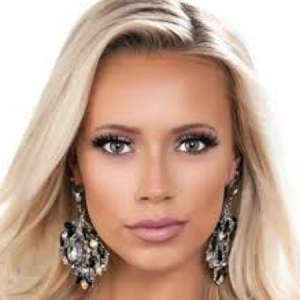 Taylor Higgins is a married woman. She is the third wife of former baseball player Chipper Jones since June 14, 2015. The couple dated for some years before they shared their vows with each other. The family is currently living together with the son, Cutler Ridge Jones born on January 11, 2017.

Who is Taylor Higgins?

Taylor Higgins is an American former Playboy model who is famous for being the wife of former Atlanta Braves baseball player Chipper Jones. She is the third wife of Chipper Jones.

She was born on April 24, 1989, in the USA. She is currently 30 years old and her birth sign is Taurus. But, she has not provided any information regarding her parent, siblings, and childhood.

Taylor holds American citizenship but her ethnicity is unknown.

Talking about her education history, she attended the University of Kentucky.

She initially worked as a Playboy model and cam girl before she tied her knot with Jones. She became the Playing Coed of the Month in 2010. Apart from that, she has not disclosed further information about her career.

Taylor Higgins came into limelight after her marriage with Chipper Jones who is a well-known American professional baseball player. He won the Valuable Player Award in 1999 for his remarkable performance. He spent almost 19 years as an MLB player for the Atlanta Braves. Jones was also selected by the Atlanta Braves for the 1990 MLB draft and he helped to lead the Braves to a World Series Championship in 1995.

It seems she has not been awarded and nominated in her career till date. However, her husband has awarded many times.

She might have earned a decent amount of money from her profession but she has not revealed her exact net worth, salary, and income. However, her husband has around $13 million as his salary and his current net worth is more than $110 million as of 2019.

Taylor Higgins has dark brown eyes and blonde hair. But, other information regarding her height, weight, body measurement, dress size, shoe size, etc. are not available.