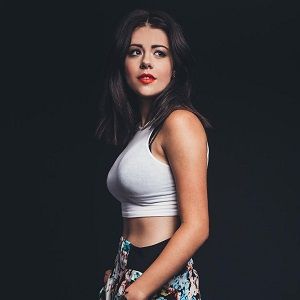 You can't lose sight of what you did to get there

Jardine had a brief relationship with All Time Low’s front-man, Alex Gaskarth for a short duration from April 2012 to August 2012. In 2015, during her Kerrang! Tour, she officially stated she was single.

Who is Taylor Jardine?

Taylor Jardine is an American singer and songwriter. She is the lead vocalist of the band We Are The In Crowd. She is recently engaged in her new project ‘SAINTE’ along with her band members Mike Ferri and Cameron Hurley.

Taylor was born on March 7, 1990, in Liberty, New York. Her birth name is Taylor Kathleen Jardine. Jardine was born to Ray and Robyn Jardine. Jardine is a triplet. Her two sisters, Lindsey and Samantha, and brother Devin include the children of her family.

When Taylor was young, tragedies befall her. Her parents got divorced which resulted in her father moving to Florida. And later, they found out that her father was dead. His death really affects Taylor’s Life. In a good way, she got the inspiration to make music. She is American.

Taylor attended Liberty Highschool. During her high school, Jardine was the lead vocalist in a band Sofmoure. She used to play Violin too during performances. Despite that, it also plays piano, guitar, and keyboard.

She began to pursue her career from an early age. She would learn to play other musical instruments besides vocal. At the age of 19, she joined the studio project, The In Crowd.

Along with Jordan Eckes (vocals and guitar), Mike Ferri (bass), and Robb Chianelli (drums), Jardine released a digital sampler through Myspace. And soon enough, they gained a fanbase. But unfortunately, Internal conflict and envy motivate their former member to hack the band’s Myspace.

Jardine didn’t give up. She cried out to their fans on YouTube about the hacking and their downfall. Consequently, the band sought Hopeless Record’s attention. And shortly after, they signed Hopeless Records. They needed a new member to fill the gap, so after signing the label, the band recruited Cameron Hurley (lead guitarist and backing vocals).

The band changed their name when Jamaican reggae band with the same name claimed copyright. As a result, they named their band ‘We Are The In Crowd’ adding ‘We Are’ to their original name. They didn’t bother to change their name completely.

We Are The In Crowd released two albums Best Intentions in 2011 and Weird Kids in 2016 after releasing an EP, Guaranteed to Disagree in 2010. In February 2016, Jardine announced a new, musical project. It wasn’t named back then. After 7 months, she revealed that the project would be called SAINTE.

Starting there, Jardine started releasing their singles such as Technicolor, With or Without Me and Eyes Are Open. The announcement of her debut EP Smile And Wave was made on June 26, 2016. It was released after one year of an announcement on June 30, 2017.

There is no record of Taylor receiving an award. But She was nominated for U.K music magazine Kerrang ! ‘s ‘Hottest Female’.

Taylor Jardine: Salary and Net Worth

Taylor’s Net worth and Salary has not been made public yet. She has kept it secret till now. Furthermore, she partnered with Never Take It Off to start her own jewelry line. Clearly, she has made a great fortune out of her career.

John O’Callaghan was rumored to have hooked up with Taylor Jardine in Jun 2014. The rumor about Taylor Jardine leaving the band We Are The In Crowd was spread on the internet.

But the rumor became fact in no time. Jardine announced her new project SAINTE, and she took a new turn in her music career.

Later, this became a controversy. Taylor had no choice but to come up with details about her resignation from WATIC. Taylor explained WATIC didn’t have the music taste that she seeks.

Jardine admitted that she preferred genre Alternative, Indie more than Pop Rock and Pop Punk. Few fans didn’t appreciate her decision whereas many of them supported her.

Taylor is 5 feet 4 inches tall. She has brown hair and brown eyes. Furthermore, there are no details regarding her body measurements.

Jill Scott
Tags : American singer-songwriter SAINTE We Are the In Crowd