Taylor Kinney is an American Actor. Taylor is in a romantic relationship with Alanna DiGiovanni.

Taylor Kinney is dating Alanna DiGiovanni since 2016. His girlfriend Alanna is a radiologist working in Philadelphia.

Previously, he was engaged with singer Lady Gaga. They met during the shoot of the music video of the song You and I by Lady Gaga.

Their privacy of the relationship was not exposed earlier but later they revealed their relationship through their engagement in 2012. However, they later split in July 2016. 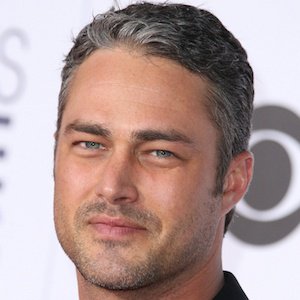 Who is Taylor Kinney?

Taylor  Kinney is an American actor and model.

He is known for playing Phil in The Other Woman, Jared in Zero Dark Thirty, Mason Lockwood in The Vampire Diaries, and Lieutenant Kelly Severide in Chicago Fire, Chicago P.D., and Chicago Med.

Kinney was born to Pamela (Heisler) and Daniel Kinney in Lancaster, Pennsylvania, the U.S on July 15, 1981.

He is of an American Nationality. Whereas his ethnic background is Mixed(German, Swiss-German, and English). Kinney has three brothers: Adam, Ryan, and Trent.

Moving towards his education, he was educated at Lancaster Mennonite School. Later, he was enrolled in Business Management at West Virginia University in Morgantown, West Virginia.

Kinney started his acting career with the TV series on Fashion House (2006). After that, he had a recurring role in The Vampire Diaries.

Apart from TV series he has played in the films like Zero Dark Thirty, Shameless, The Forest, and Here and Now among others.

Furthermore, he was featured in a music video “You and I” which was sung by Lady Gaga in 2011. Additionally, his other notable film and TV include Chicago Fire, Trauma, and Consumed.

Talking about his net worth and salary, he has an estimated net worth of $8 million but his salary is unknown.

Kinney is far from all the media rumors and has not been involved in any controversy yet.

Taylor Kinney weighs around 80 kg and stands 5 feet 11 inches tall. He has dark brown hair and green eyes. Furthermore, he fits in 11.5 US size shoes.

Is Lindsay Hubbard dating Luke Gulbranson or is it just a one-time hookup?