Taylor Lautner is an American actor who starred in the Twilight franchise as Jacob. Taylor is engaged to Taylor Dome.

Taylor Lautner is engaged to his girlfriend Taylor Dome, a registered nurse, influencer. He proposed to her fiancee on 11th November 2021. Soon, the couple is set to get married!

He was dating Billie Catherine Lourd since 5 December 2016. However, the couple split in July 2017.

Taylor and Raina Lawson were dated together in 2015 in Calabasas and were seen enjoying a casual lunch.

Taylor Lautner and his ‘Abduction’ co-star Lily Collins were dated after they were spotted at lunch together then watching a football game in November 2010 and broke up in September 2011. Taylor and Taylor Swift were a teen sensation for a few months of 2009.

They were speckled on dates together in September 2009, and Lautner included a sketch about her in his SNL appearance. But the two split at the end of the year, with sources saying that Swift was less interested than Lautner in the relationship.

After they split, she felt guilty and wrote the song ‘Back to December’ as an apology to him. Selena Gomez and Taylor Lautner dated in Vancouver in April 2009 while filming ‘Ramona and Beezus’ and ended in July 2009.

Taylor and Sarah Hicks were high school sweethearts who began dating in 2006. After being on and off for many years, they ended their relationship in 2009. 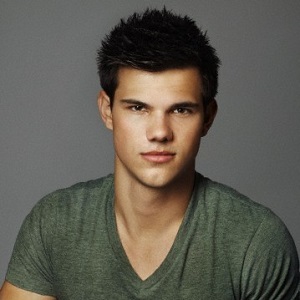 I like to think of myself as very loyal, and I love everyone I surround myself with, whether they're friends or girlfriends or whatever

Honesty and loyalty are key. If two people can be honest with each other about everything, that's probably the biggest key to success

I believe in the saying, 'If you aim at nothing, you're going to hit nothing.' So if you don't set goals, then you have nowhere to go.

Who is Taylor Lautner?

Taylor Lautner is an American actor, model, and martial artist. He is best known for playing the role of ‘Jacob Black’ in “The Twilight” film series based on the novels of the same name by Stephenie Meyer.

A teenage heartthrob, Lautner is ranked amongst the ’50 sexiest men’ in Hollywood and was the highest-paid teenage actor in America in 2010.

Taylor Lautner was born on 11 February 1992 in Grand Rapids, Michigan.

He was born to Deborah(mother) and Daniel Lautner(father). He and his younger sister, Makena are raised as Roman Catholics. Further, he took his first karate class at the age of six and trained under Michael Chaturantabut, the founder of Xtreme Martial Arts.

By the age of eight, he became a black belt holder, won several junior martial arts championships, and also appeared on the ISKA Karate Event on television in 2003.

What nationality is Taylor Lautner?

His nationality is American and his ethnicity is a mix of German, French, Dutch, and Native American Lineage.

He attended public school in Valencia and indulged in a lot of extracurricular activities like football, baseball, and hip-hop dance. It was during this time he moved to Santa Clarita, California, and began acting.

After he moved to Los Angeles, Taylor appeared in a number of small television roles and commercials. He appeared in ‘Shadow Fury’, a television- film in 2001.

Following the brief success of ‘Shadow Fury’, he was offered a voice-over job for ‘Rugrats Go Wild’ and he appeared on ‘The Bernie Mac Show’, ‘My Wife and Kids’ and ‘Summerland’.

He soon went back to singing voice-order roles for movies. His first breakthrough performance was in the film, ‘The Adventures of Shark boy and Lava Girl in 3-D’ in 2005.

In 2008, he was cast as Jack Spivey for the short-lived NBC dramas. The same year, filmmakers began searching for a boy, preferably of Native-American descent, for the role of Jacob Black for the first installment of the ‘Twilight’ film series.

During his audition, he read lines from the second and third books with Kristen Stewart, who was already chosen for the role of ‘Isabella Swan’.

He was selected for his good looks and passed the screen test for his personal and dialogue delivery skills. The movie became a critical and commercial success.

In an attempt to do justice to the role of the lovelorn wolf-boy, he weight-trained extensively and gained approximately 30 pounds of muscle, which wooed women across the world and earned him the ‘Teen idol’.

In 2010 he was also cast in ‘Valentine’s Day’ as Willy Harrington, where he played Taylor Swift’s love interest. His success in the three Twilight movies, he appeared in ‘Abduction’ opposite Lily Collins, which did poorly at the box office, partially due to his poor performance, which was heavily criticized by critics.

On the report of Taylor Lautner, most of the magazines have announced that he was gay. Taylor has a new girlfriend that he saw holding hands with 19 years old actress Maika Monroe during an LA Dodgers game on Friday night.

There are no desperate rumors regarding his professional and personal life as well.

Taylor has a height of 5 feet 10 inches. His body weighs 76 kg. He has black hair and dark brown eyes.