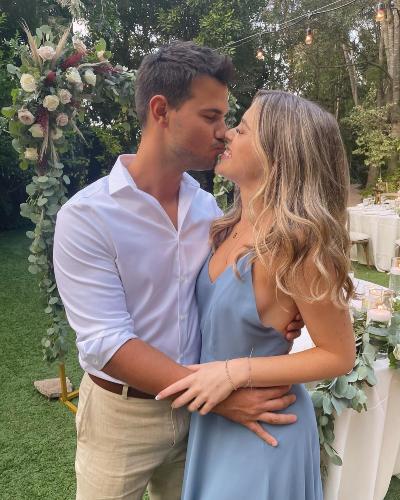 Taylor Lautner is in a relationship with Tay Dome. The couple has been dating each other since 2018. Taylor made their relationship Instagram official on 29th October 2018 with a picture of him kissing his beautiful girlfriend on the cheek. They wore matching Tune Squad-themed Halloween costumes from the movie SpaceJam.

Since then the couple has been making their romance official and posting pictures of each other on Instagram. Recently on 6th August 2021, Lautner uploaded two pictures of him packing on the PDA with Dome on Instagram. The pair were standing overlooking the beach and ocean. Their relationship has been going really well.

On 23rd August 2021, they attended a wedding and shared a photo which Taylor captioned,

“Did you even go to a wedding if you didn’t take home a bridesmaid?”

His girlfriend Tay Dome is a registered nurse. She has a YouTube channel named Tay Dome which has 7.85k subscribers. Dome makes self-care and lifestyle videos.

Also read Romantic Couple Taylor Lautner and Billie Lourd Break Up After 8 Months Together! Check out their Relationship History here!!

How much is Taylor Lautner’s net worth?

Also read Couple Billie Lourd and Taylor Lautner again headed to Stagecoach Festival 2017. Are they thinking to take their relationship affair to the next level?

Taylor Lautner is an American actor, model, and martial artist. He is best known for playing the role of Jacob Black in The Twilight film series based on the novels of the same name by Stephenie Meyer.

A teenage heartthrob, Lautner is ranked amongst the 50 sexiest men in Hollywood and is currently the highest-paid teenage actor in America. Read more bio…