American actress Taylor Schilling won the ‘Satellite Award for Best Actress in a Television Series – Musical or Comedy’ in 2013. 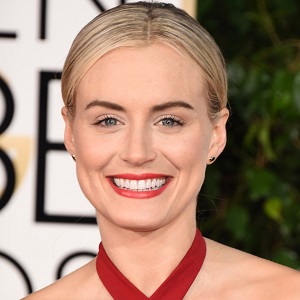 Be yourself. You're okay. And it really doesn't matter what other people think

I wanted to wear a uniform when I was in high school, but I couldn't. I was like, 'It would be so much easier

I try to come at fitness and nutrition from a perspective of gentleness and what will make me feel good afterwards. I try to stay out of the mindset of needing to fix myself. I do whatever seems fun to me.

Taylor Schilling is rumored to be dating an American actress and musician Carrie Brownstein for over two years.

Schilling’s sexual orientation is not known accurately but, it is believed that she is a bisexual or homosexual (lesbian) because of her relationship with Carrie Brownstein.

She is rumored to be in a relationship with Brownstein since March 2015 and was unveiled in August 2015 just after one month. Their relationship is not confirmed yet.

Talking about her marital decision, she is very private with her personal life and has not revealed any information about her interest in marrying a guy and bearing a child to lead a happy life.

Who is Taylor Schilling?

Taylor Schilling is an American actress best known for her role on Netflix original comedy-drama series ‘Orange is the New Black’ as Piper Chapman for which she was nominated for the ‘Golden Globe Award for Best Actress – Television Series Drama’ and the ‘Primetime Emmy Award for Outstanding Lead Actress in a Comedy Series’ and won the ‘Satellite Award for Best Actress in a Television Series – Musical or Comedy’ in 2013.

Taylor was born in Boston, Massachusetts, the United States of America on 27 July 1984. His nationality is American and ethnicity is mixed(German, English, Swedish, and Dutch).

Born to Patricia (née Miller), an MIT administrator, and Robert J. Schilling, a former prosecutor, Taylor Schilling had a sheer interest in acting from the very early age. She was born during the time of divorce of her parents, she moved to West Roxbury and Westland for the purpose of gaining a quality education. She has a brother named Sam Schilling.

While continuing her study in Wayland High School, she exhibited immense interest in acting and was very active in a stage production of ‘Fiddler on the Roof’ in the school’s Theatre’s Program. After her high school graduation, she joined Fordham University’s at Lincoln Centre and completed her Bachelor’s Degree giving continuity to her active participating traits.

She then, joined New York University’s ‘Tisch School of Arts’ to study acting but, left her studies for the sake of her fostering interest in acting. From that time, she started giving auditions in some of the movies and Television shows.

Taylor Schilling started her career as a supporting role in the film ‘Dark Matter’ in 2007. Via audition, she was given an opportunity to play a role in the NBC medical drama ‘Mercy’ as Nurse Veronica Flanagan Callahan, a tough Iraq War-veteran, and former military nurse-turned-medical practitioner.

After winning Emerson College Playwrights Festival Outstanding Performance Award, she portrayed ‘Dagny Tagart’ in ‘Atlas Shrugged: Part I’ in 2011. In 2013, he had a breakthrough for her role as a Piper Chapman in the Netflix comedy-drama series ‘Orange is the New Black’ and won the ‘Satellite Award for Best Actress in a Television Series – Musical or Comedy’ in 2013.

Now, she is one the most paid actress in the United States of America and her net worth is $1.5 million excluding her $35000 salary per episodes

There is a huge curiosity in fans and critics of Taylor Schilling to be a Bisexual or homosexual. She is not clear about her relationship status because sometimes she shows the sign of being with Carrie Brownstein but, sometimes, she states that she doesn’t like dating because it takes a lot for her to be into somebody.