Taylor Spreitler is an American film and TV actress. She is currently in a relationship. 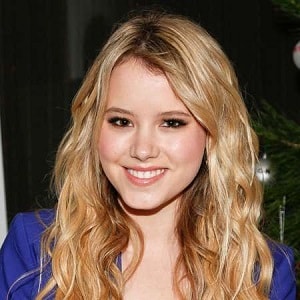 I grew up very differently than a lot of other people in my hometown in Mississippi. But I can't imagine my life any other way. I flew home and surprised my best friend at his graduation, and I remember turning to my mom and saying, 'My graduation was so much cooler than this.' I had Melissa Joan Hart give my commencement speech.

I think it's very helpful having Twitter and all that. I mainly talk about work on Twitter. I keep my personal life separate from my work life, but I think it helps because everybody's on the Internet now - everybody has Facebook

In L.A., it's easy to get wrapped up in this young Hollywood mess. You feel like you have to go out every night. You have to realize that you're here to work. I didn't move out here to party all the time.

What is the relationship of Taylor Spreitler?

Taylor Spreitler dated former model and actor, Dylan Patton in the past. Recently she is in a relationship. She has been dating David Antonsson Crivello and she introduced her boyfriend to her fans through a picture via her Instagram handle in April 2017.

Taylor Spreitler is an American film and TV actress who is best known for her TV series namely ‘Days of Our Lives’, ‘Melissa & Joey’ and ‘Kevin can wait’. Taylor Spreitler won a statewide beauty and talent competition when she was 6 years old.

She was born on October 23, 1993, in Hattiesburg, Mississippi, US. She was raised in Wiggins and later the family shifted to Amory. Her father’s name is Danny Spreitler and her mother’s name is Denise Spreitler. Her Zodiac sign is Scorpio.

She has got a lot of support from her family in her profession. Unfortunately, her father took his own life due to depression on July 7, 2016.

She was homeschooled from A Beka Academy and she has completed her graduation. She has been focusing on her professional career after her studies.

She started her career as a model and first featured in a national campaign for ‘Mortin’. Then after, she started in various brands like the peanut-butter brand ‘JIF’, the chain of restaurants ‘Chuck E. Cheese’s,’ and the global independent energy brand ‘Hess Corporation’.

She made debut acting in the popular American drama ‘Law and Order: Special Victims Unit’, in 2005. Also, she acted in a single episode of the deride named ‘Pure’.

She became successful in getting a place in ‘Hottest Newcomers’ of the magazine ‘Soap Opera Digest’ in July 2009. She portrayed the character of ‘Mia McCormick’ in the series named ‘Days of Our Lives’ from January 2009 to June 2010.

Then, she acted as the main cast of the American show ‘Melissa & Joey’ up to August 2015. She played the role of ‘Hannah Green’ in the film ‘Girl on the Edge’ in 2015 and played as starring roles in horror movie ‘Amityville: The Awakening’ in 2017.

Information regarding family, childhood, education, profession, net worth, relationships, etc. of Alexandra Krosney, Christoph Sanders, Andrea Deck, Alexandra Breckenridge can be found on the given link.

Taylor Spreitler: Salary and Net Worth

As of 2022, she reportedly has around $1 million net worth. Her salaries and earnings are still under review.

There was a rumor that Nick Robinson and Taylor Spreitler were dating but it is not confirmed and isn’t based on anything concrete. Other rumors and controversies are not heard about her so far.