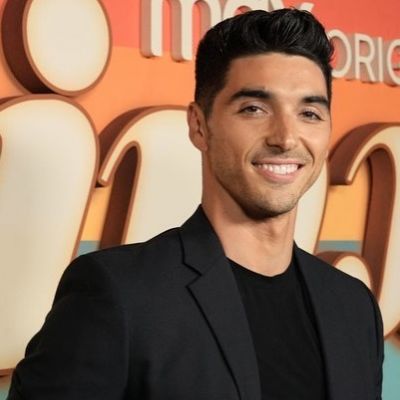 As there is no information about his dating life, we can safely assume that Taylor Zakhar Perez is not seeing anyone right now, and we can indeed say that he is unmarried and single.

The only time he has shown any sign of love is during his movies like, ‘Kissing Booth 2‘ which were only meant to be taken professionally and nothing more.

Who is Taylor Zakhar Perez?

Taylor Zakhar Perez is a popular actor, model, and Instagram star who hails from America. He soared to fame after appearing as Marco Pena in the Netflix teen film, The Kissing Booth 2.

The Kissing Booth 2 actor was born on December 25, 1991, in Chicago, Illinois, the United States. As of 2022, he is 30 years old holding an American nationality. Similarly, his ethnicity is Mexican.

He was born to his mother, Antoinette Zakhar while the name of his mother has not been disclosed yet. His mother is of aesthetician descent.

He is the third youngest child of his parents having 7 siblings. Among them, Koehn, Jenna, Marie, Kaie, and Marie are his sisters while his brothers are named, Ron and Grant.

As per his academics, although he received a swimming scholarship to Fordham University, he later enrolled at UCLA. From there he majored in Culture, Community, and Spanish along with a minor in TV and Films.

In his initial career, he appeared in several famous shows like Young & Hungry, Code Black, iCarly, and Scandal.

In 2020, he played the role of Marco Valentin Peña in the American comedy film, ‘The Kissing Booth 2.’ He even took choreography and guitar lessons for his role in the movie.

Again in 2021, he reprised the same role in the third part of the movie, ‘The Kissing Booth 3.’

Taylor Zakhar Perez played the role of Shane Brody in the comedy streaming series, ‘Minx’ in 2022.

Similarly, he will be appearing as Dustin in the American comedy film, ‘1Up’ which is set to release on July 15, 2022, by Amazon Studios.

Adding more, he will be starring as Alex Claremont-Diaz in the Amazon Prime Video’s Red, White & Royal Blue opposite Nicholas Galitzine.

Taylor Zakhar Perez is a philanthropist as well who has had a partnership with Variant Malibu, a 3D tech company to make and design masks.

The handsome actor, Taylor has a net worth of about 500K USD. This is the outcome of his career as an actor. As he likes to keep his life low-key his salary and income have not been disclosed yet.

Taylor Zakhar Perez is a hard-working star who is currently focused on his career. So, the star is not involved in any rumors or controversies up to date.

The handsome actor stands at the height of 6 feet weighing around 65 Kg. In addition, his chest size is 40 inches, waist size is 32 inches and hips size is 14 inches.

Moreover, his physical appearance includes, a fair complexion along with a pair of dark brown eyes and light brown hair.

Heading toward his physical appearance, Taylor has an Instagram account under the username, @taylorzakharperez having more than 3.9 million followers.

On the other side, he also owns a Tiktok account, which is enriched with over 2.8 million followers and 23.6 million likes.