Téa Leoni is an American actress and producer. Her breakthrough role was in an action comedy film Bad Boys. 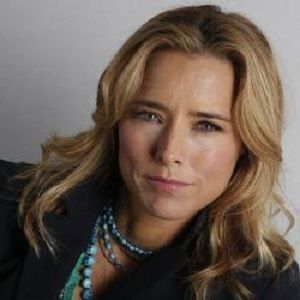 We have this incredible cast with Billy Bob Thornton, who is maybe my new favorite person in the world

Hollywood means work and getting yourself out there, and for a while, I pooh-poohed that idea. My ego still doesn't get stroked by fame. But I've been guided by people who have told me if you aren't out there, then studios and producers are less likely to pull you into the projects you might want to do.

Téa Leoni was a married woman. She married TV producer Neil Joseph Tardio, Jr. on June 8, 1991. But the marriage didn’t go well so they divorced in 1995. They did not have any children.

Similarly, she married an actor, David Duchovny on May 13, 1997. The couple has two children – Madelaine West and Kyd Miller. The couple started living separately, allegedly due to Duchovny’s sex addiction. In 2014, they separated legally.

Currently, she is dating ‘Madam Secretary’ co-star, Tim Daly. She and her boyfriend are started to each another since 2014.

Who is Téa Leoni?

Téa Leoni is an American actress and producer. Téa Leoni is well for her film roles in ‘Bad Boys,’ ‘Deep Impact,’ ‘Jurassic Park III,’ and ‘Fun With Dick and Jane’.

Currently, she is starring in CBS’ ‘Madam Secretary.’

She was born in New York City, New York, the United States on February 25, 1966, to parents Anthony Pantaleoni and Emily Patterson. Her father was a corporate lawyer with the firm Fulbright & Jaworski. Whereas, her mother was a nutritionist.

Talking about her education, she attended two private schools namely, Brearley School and The Putney School. Unfortunately, she did not complete her studies at Sarah Lawrence College.

On talking about her profession, during 1988, she made her entry into the entertainment industry, when she participated in the casting call for a new TV series to be named as ‘Angels 88.’ she also entered the audition, after accepting a challenge from a friend.

Whereas, she also appeared in six episodes of the series. During 1991, she also made her debut in movies, by performing a small part in the movie, ‘Switch.’ Likewise, in 1992, she was also a part of a sports comedy movie, ‘A League of Their Own.’

In the same year 1995, she also  performed as the female lead, ‘Julie Mott,’ in the action-comedy movie, ‘Bad Boys.’ It was her first lead role in movies. In the movie, she co-starred with Will Smith and Martin Lawrence. Moreover, her performance was noteworthy, and after the success of the movie, she also started receiving better offers.

During  1998, she also performed as the female lead, ‘Jenny Lerner,’ in the science-fiction movie, ‘Deep Impact.’ The movie plot revolved around a comet, which was about to hit the earth.

During 2000, she also starred in the romantic comedy movie, ‘The Family Man,’ along with Nicolas Cage. Moreover, she also played ‘Kate Reynolds,’ the girlfriend of the male lead.

On talking about her lifetime achievements and awards, she won Saturn Award for Best Actress for The Family Man (2000). Currently, she has not won any of the awards.

Téa Leoni: Salary and Net Worth

There is no information about her salary and other income. Her net worth is around $20 million.

There was a rumor that she was pregnant. Currently, there are no such rumors and controversies.

On talking about her body measurements, Téa Leoni has a height of 5 feet 9 inches. Additionally, she weighs is 55Kg. In addition, she has a measurement of 34-26-34 inches respectively.

Her hair color is dyed blonde and her eye color is blue. Furthermore, her dress size is 4 (US) and her shoe size is 7.5 (US).