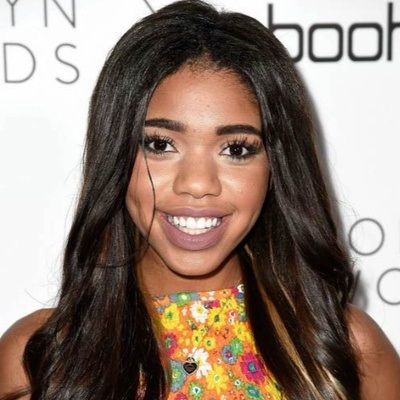 Teala Dunn’s relationship status single. However, she was spotted with the actor Nolan Zarlin on Instagram. All their fans were in the impression that they were dating each other. Zarlin officially confirmed that they are not dating.

Previously, she dated Billy Unger. They started dating in 2014. She also dated Noah Teicher. They broke their relationship in a very bad note where Dunn publicly accused him of cheating. The break up changed into a Twitter war zone where she was backed up by her friends including Eva Gutowski, Rickey Thompson, and Sarai Jones.

Who is Teala Dunn?

American Teala Dunn is an award-winning actress and YouTuber. Dunn is renowned as Lindsey Kingston of the TV series, Are We There Yet?

She is also a voice actor. Last, she contributed voice for the character Turtle Tuck in the TV series, Wonder Pets!

Next, she is appearing as Mischa in the comedy movie, Action #1.

Teala Dunn was born on the 8th of December 1998 in New Jersey, United States. She is of British-Scottish ancestry.

Her elder sister, Lyanna Dunn serves on the navy.

– She started her career at the age of 12 with the TV series, Law & Order: Special Victims Unit as Nia for a single episode only. After the TV series, she featured in Queens Supreme.

-In 2005, she debuted in the Movie, Transamerica along with actor Kevin Zegers. In the movie, she played the character of Little Girl. Two years later, she contributed voice for character Bunny in Enchanted.

-In 2007, she was cast in The Naked Brothers Band as Juanita. She continued the character in 2008 too. After the series, she portrayed the character of Lindsey Kingston in Are We There Yet? The series is one of the milestones of her career. Altogether, she has featured 78 episodes of the series.

– Teala is also a voice artist by profession. Last she has contributed the voice for the TV series Wonder Pets! In the animated series, she has contributed the voice for the character, Pony’s Sister. She is associated with the show since 2005.  Apart from that, she joined with the animated series, DC Super Hero Girls as Bumblebee. Bumblebee is one of the iconic superheroes of Hero High.

From the YouTube channel, TTLYTEALA her yearly earning is $10k-$17k US. Apart from that, she earns $1.9k US per video from her second channel, Tealaxx2. Dun also earns as an Instagram Influencer.

She is a black-eyed brunette. Her height is 5 feet and 3 inches.