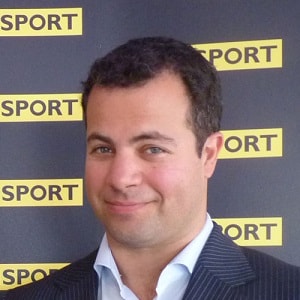 'I felt it necessary to give new qual 1 more chance.. We live in a world where there is too much over reaction'

Ted Kravitz is a married person. However, he has not disclosed information regarding his wife. The couple has welcomed three daughters in 2011, 2012, and in 2018.

But, their names are also not revealed yet.

Who is Ted Kravitz?

Ted Kravitz is a popular British TV presenter who is prominently popular for a pit-lane reporter for Formula One serving for Shy Sports F1.

Alongside journalist, he is also an aircraft pilot and the fact was revealed by commentator Jonathan Legard during the 2010 Turkish Grand Prix.

He was born on March 21, 1974, in Hammersmith, London, England. His birth name is Theodore Joseph Nathaniel Slotover.

Ted holds British citizenship but his ethnicity is English.

After graduation, Ted Kravitz was trained as a journalist at CBS News, London. After that, he began working for a local radio station as a news reporter and sports reporter in South-West England. Later, he returned to London and worked at 95.8 Capital FM on the news show ‘The Way It Is’.

After working as a news and sports reporter for London News Direct and LBC, he joined Chrysalis Television in the fall of 1996. He worked on their Grand Prix Programming and later worked with ITV as a producer in 1997. After that, he served as a pit-lane reporter on F1 and also presented the British Touring Car Championship in 2007 and 2008 while working for ITV.

He shifted to BBC in 2009 and continued his job as a pit-lane reporter alongside Lee McKenzie in which he covered the Formula One. He worked there until he made his decision to move to Sky Sports F1 in 2011.

It was declared in December 2011 that he would join Martin Brundle and others from the BBC to work for BSkyB’s Sky Sports F1 coverage in 2012. Later, he hosted the channel’s weekly show, The F1 Show. He joined Georgie Thompson as a co-star for the 2012 season but in 2013, Thompson was replaced by Natalie Pinkham.

Ted Kravitz has an estimated net worth of about $ 3 million. The reporter will receive an annual salary of $200,000 from his successful reporting career with Sky Sports F1.

There is a rumor that he has been removed from the Sky F1 channel lineup and had his contract terminated by the new head of sky sports and also more intriguing rumors that he has gone missing.

However, a solid conclusion is yet to come.

Ted Kravitz has got light brown hair and dark brown eyes. Apart from that, information regarding his height, weight, etc. are not available.