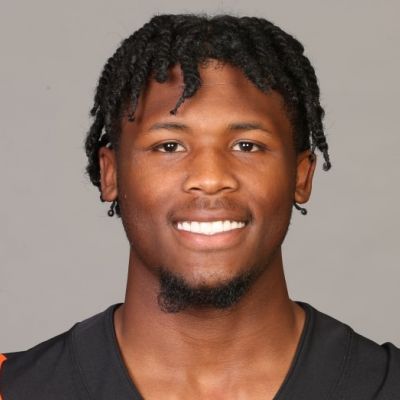 Who is Tee Higgins dating?

The young sensation, Tee Higgins is possibly single and is not dating anyone.

Higgins has kept everything secret about his personal life and far from the tabloids. There isn’t any solid proof that leads toward his married lifestyle and children.

Who is Tee Higgins?

Tee Higgins is an American football player. He has played for the Cincinnati Bengals of the National Football League (NFL) as a Football wide receiver.

Tee Higgins was born in Oak Ridge, Tennesse, the United States on January 18, 1999. Higgins is 23 years old as of 2022 and holds American nationality.

He possesses All-American nationality Capricorn is his birth zodiac sign according to the astrological chart. Tamaurice William “Tee” Higgins is his full birth name.

This athlete, Higgins has not disclosed any info about his parents or siblings.

Moving towards his educational life, he went to Oak Ridge High School based in Oak Ridge, Tennessee. He made 68 receptions in 1,044 yards with 18 touchdowns. He later switched to Clemson University from the University of Tennessee.

Tee Higgins made 17 receptions for 345 yards and two touchdowns in 13 games at Clemson in 2017 as a Sophomore. In 2018, he entered as a starter in his sophomore.

Similarly, he scored three receptions for 81 yards and won the game against Alabama with 44-16 wins during the College Football Playoff National Championship.

He played against the Los Angeles Chargers in his NFL debut in week 1 of the 2020 season. On Thursday Night Football, he had 35 yards over the Cleveland Browns in week 2.

Followingly, he made five receptions for 40 yards and had professional receiving touchdowns in the 23-23 tie while playing over the Philadelphia Eagles in Week 3.

Similarly, his team lost over the Indianapolis Colts in week 6, in which he scored 6 receptions for 125 yards by 31-27.

While playing over the Pittsburgh Steelers, he scored seven receptions for 115 receiving yards with one touchdown, he lost by 36-10. Then, he ended his rookie season with 67 receptions for 908 yards and 6 receiving touchdowns.

Before starting the season, he announced that he would change his jersey number from 85 to 5 in the 2021 NFL season. Improving upon his rookie season, he had 74 receptions for 1,091 yards with six touchdowns in 14 games.

He made 7 receptions for 96 yards and defeated the Tennessee Titans in the Divisional round by a 19-16 win. Higgins scored six passes for 103 yards, by 27-24 overtime wins, and led the Bengals in the Super Bowl LVI.

During the 2021 season, Higgins recorded 74 catches for 1,091 yards and caught six touchdowns.

Tee Higgins flaunts a massive net worth of over 1.5 million USD as per the sources. There is info available on his salaries and earnings.

Owing to his growing football career, Tee Higgins Eason has not been part of any rumors and controversies till now. If the info related to him is available it will be further updated.

Tee Higgins is 6 feet 4 inches tall weighing around 98 Kg. Coming towards his physical appearance, with a dark complexion, he has a pair of Black eyes and hair of the same color as well.

Coming over the social media presence of Tee Higgins, he is active on Instagram under the username, @teehiggins having more than 313K followers. He also has a Twitter account which is enriched with over 113.8K followers.

On the other hand, there is also a Twitter account with his name, which has garnered around 111.4K followers and 312.5K likes.

Find Out About, Marquise Copeland, Leonard Floyd, and Cam Akers.