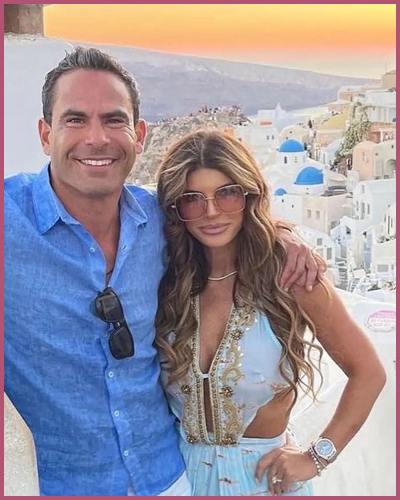 The beautiful couple who recently tied the knot on August 7, 2022, were now on their honeymoon. At present, the Newlywed is enjoying a honeymoon in Greece.

Teresa Giudice and Luis “Louie” Ruelas have been updating their Instagram followers regarding their romantic as ever honeymoon. As seen in the pair’s IG story, the newlyweds are staying at a luxury hotel called Calilo, located in a remote part of Los island.

Teresa’s story continued with the couple enjoying a scenic helicopter ride before arriving at the tranquil retreat. They shared photos/videos of their every beautiful moment including photos of  the hotel’s mosaic exterior and a sculpture that spells out the word “love.”

Similarly, Teresa shared a photo of a swing resting over a pool of water, and a photo of her husband sporting a light blue button-down as they made their way to the beach.

Also read ” Now That’s a Wedding Dress! Find Out More About the Designer Who Dressed Teresa Giudice for Her Wedding!”

On the other hand, she is also sported in a blue bikini in a video as she blows a kiss to the camera. Also, Teresa matched with matching blue sunglasses.

Besides, the pair were spotted kissing and hugging while walking hand-in-hand down the beach in front of the other beachgoers. Ruelas is pictured grabbing his wife’s backside while the pair laughed.

Teresa is also an author and has penned books including Skinny Italian Cookbooks and Milania Hair Care. See more…