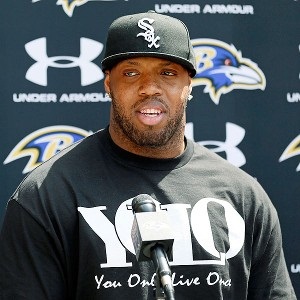 Whenever we go in there and are playing Ravens-style defense, then teams are in trouble. We really haven't gotten into that because the quarterbacks have been able to get the ball out. It takes away our aggressiveness.

It is known that Terrell Suggs married Candace Williams on December 14, 2012. The couple has two children. together.

However, the couples have become known for domestic abuse cases, both before and after their marriage. Hence, the couple is no more together and have separated.

Who is Terrell Suggs?

Terrell Suggs is a professional American Football player. He is best known as a linebacker for Kansas City Chiefs team.

He is a six-time Pro-Bowl selection, a two-time All-Pro and was the NFL Defensive Player of the Year in 2011.

Terrell Suggs was born on October 11, 1982, in Minneapolis, Minnesota, the USA. His nationality is American and ethnicity is All-American.

He is the son of Laverne Diane(mother) and Donald Lee Suggs(father). Growing up, he was interested in and played football.

He attended Chandler High School, before moving to Hamilton High School, where he played for the school’s football team.

After matriculating, Terrell Suggs attended Arizona State University where he played as a defensive end for the Arizona State Sun Devils football team from 2000 to 2002. At the end of his college career, he had a school-record of 44 quarterback sacks, and 65.5 tackles for losses.

He also set the NCAA single-season record for 24 sacks, gaining first-team All-Pac-10 selection. He was also recognized as a unanimous first-team All-American and the Pac-10 Defensive Player of the Year.

Terrell joined the 2003 NFL Draft and was picked 10th overall by the Baltimore Ravens, at the age of 20 making him one of the youngest defensive players ever drafted. As a rookie, he immediately caught the attention of many by posting a sack in each of his first four games. He would go on to become Defensive Rookie of the Year despite only actually starting one game that year.

In 2004, he made his first Pro Bowl appearance, and in the following season, he played mostly as a defensive end which increased his tackles. In 2006, Suggs was responsible for helping the team build one of the best defenses in the NFL, with the Ravens only allowing 12.6 points per game and this led him to a second Pro Bowl selection. The following year, he continued to produce great performances, however, the Ravens dipped to a low 5-11 record.

During the next season, he was named to the Pro Bowl once again and was able to achieve a career-high nine pass break-ups. He was pivotal in the wins of the Baltimore Ravens during the 2008 to 2009 playoffs, so in 2009, he was given a 6-year $62.5 million contract which launched his net worth to a high place, and he was even given a $33.1 million bonus making him the highest-paid linebacker in NFL history.

Despite this increase in net worth, he was not very productive in 2009 due to an injury, but he returned to form in 2010 and made a career-high three sacks in a single game.

In 2012, Suggs was hit with an Achilles tendon injury which many expected would lead him to miss the entire season. However just five months after the surgery he returned to action and performed well, showcasing a quick recovery.

He has a net worth of $22 million but his salary is not revealed yet.

This player was in news for abusing his wife before and after the wedding many times.

Terrell Suggs has a height of 6 feet 3 inches. His body weighs 120kg. He has black hair and black eyes.

You may also like to read Matt Franco, Javier Lopez, and Willie McCovey.