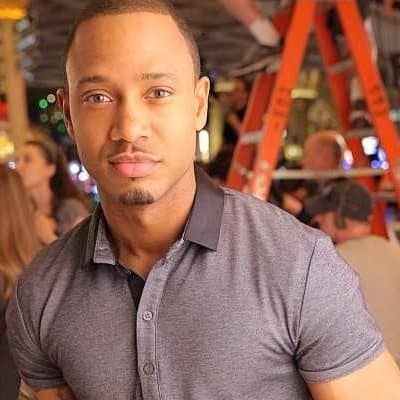 Terrence Jenkins is currently in a relationship with model Jasmine Sanders who is known as Golden Barbie. In March 2016, Terrence revealed his relationship with her. Since then, the couple has been flaunting their relationship on their respective social media accounts.

However, the couple had a brief break up due to their busy schedule and unavailability of time to spend with each other. But later, the couple has continued dating despite the ups and downs of life and enjoy their life.

On 8 April 2018, Jasmine posted a picture of her and Terrence and also write a caption on Instagram that thanked Terrence for fulfilling one of her wishes to travel to Oslo and helping her make a quick visit to her family. Now they are together and settled relationship goals, also they adopted two little cute French bulldogs, named Bam Bam and Rocky.

Who is Terrence Jenkins?

Terrence Jenkins is an American actor, model, host, producer, DJ, and philanthropist. He is one of Hollywood’s most skilled multi-hyphenates. He is best known as the host of BET’S popular music video countdown show 106 & Park.

Terrence was born on April 21, 1982, in Queens Country, New York. He holds an American nationality and All-American ancestry. His Zodiac sign is Taurus.

Terrence Jenkins never mentions his father’s name. He was raised by his mother whose name is Lisa Gonzalez.

Terrence grew up in Raleigh and Rocky Mount, North Carolina. He worked at WRSV soul 92.1 which is an FM radio station as a DJ until he graduated from high school.

Terrence attended his high school in Northern Nash High in Rocky Mount, North Carolina. He graduated from North Carolina A&T State University in Greensboro in 2004 with a degree in mass communication.

Terrence Jenkins has multiple professions in his career including DJ, host, actor.

Terrence started his career as a DJ at a young age. During his college years, he gets served as Student Government Association President and DJ for his college radio station WNAA.

Also, Jenkins worked in the diversity office of Nascar in Daytona Beach, Florida. Likewise, he worked in a radio station as a DJ like 102 Jamz.

Jenkins auditioned for the BET New Faces Contest after winning it he became the hosts of BET’s hip hop and R&B music video program 106 & park with co-host Rocsi in July 2006.

That show became the highest-rated music set of all time. After hosting the show for six years, both hosts announced that they would be leaving the show. His last show was broadcast on September 28, 2012.

He co-hosted the radio show ‘Khloe After Dark’ on Y 100. He also hosted the Miss USA beauty Pageant with Julianne Hough in 2016 and 2017.

In 2019, he hosted two episodes of MTV’S reality television series ‘Are You the One?’ and sixteen-episode of crime drama series Power confidential.

Jenkins made an appearance in films like The Heart Specialist in 2006 and Stomp the Yard: Homecoming in 2010. He appeared in Estelle’s music video with Kanye West who is an American rapper also called ‘American Boy’ in 2008.

In 2009, Jenkins saw on E!’s reality television series like ‘Kourtney and Khloe Take Miami’ starring with Kourtney and ‘Keeping Up with the Kardashians’ with Khloe Kardashian.

In 2012, as Michael Hanover in the romantic comedy film Think Like A Man which grossed more than $96 million at the worldwide box office. He appeared in many films like Sparkle, Baggage claim, Battle of the year, The Perfect Match, etc.

On October 1, 2013, HarperCollins which is the world’s largest publishing companies released the book on Terrence Jenkins’s journey titled “The Wealth of My Mother’s Wisdom” which was inspired by Jenkin’s mother and her extraordinary journey of raising him while she was still a teenager.

In 2018, he also featured in the magazine, Forbes called him one of the most respected on-air personalities in pop culture.

He is a spokesperson for Ronald McDonald’s House Charities Future Achievers Scholarship Camping, a mentor with Steve Harvey’s Disney Dreamers Academy, and an avid supporter of the Newark, New Jersey Boys and Girls Club.

Terrence nominated for ‘Daytime Emmy Award for Outstanding Entertainment News Program’ from E! News in 2014 and 2015.

According to the sources, an American multi-talented personality earns an estimated net worth of $4 million dollars.

Terrence is in rumors after his inappropriate dancing video got viral on social media with his rumor girlfriend Jasmine Sanders.

Terrence’s height is about 5 feet 9 inches. His weight is about 75 kg. His face is in Oval shape and he has brown eyes color and also hair as well.