Terry Bradshaw has been married four times and divorced thrice. His present wife is Tammy Bradshaw wed in 2014. He has two kids-Rachel and Erin.

The 73-year-old veteran American footballer, Terry is a married man. In 1971, he was married to Melissa Babich and was married for three years.

The couple separated in 1974 after being in married life for three years.

In the same year, he tied the knot with his second wife Jojo Starbuck. Furthermore, they carried their relationship for beautiful nine years and divorced in 1983.

Back in 1984, Terry was married to Charlotte Hopkins. Together they also welcomed two children, Rachel Bradshaw, and Erin Bradshaw.

Although, they couldn’t maintain their married life further and broke up after 15 years of a long relationship.

Now he tied the knot with Tammy Bradshaw in 2014. The pair began dating in 1999 and finally exchanged their vow in 2014. Currently, Terry and Tammy are enjoying their married life and living elegantly. 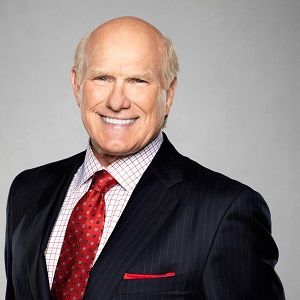 All great empires die from within.

You have to understand, now, I'm a momma's boy. I'm from the south. My way of being raised is totally different than the big city life. I truly was a country boy.

The First Amendment rights, everybody has them.

Who is Terry Bradshaw?

Terry Bradshaw is a former American football player. Previously, he played for Pittsburgh Steelers as a quarterback and also won four Super Bowl Championships with the team.

Currently, he has been also a TV sports analyst and co-host of Fox NFL Sunday since 1994. Additionally, he was also included in the Pro Football Hall of Fame in 1989.

Terry is 73 years old. He was born on September 2, 1948, in Shreveport, Louisiana, United States. He is the son of William Marvin “Bill” Bradshaw (father) and Novis (mother).

Talking about his nationality, he is American and his ethnicity is mixed (English, German and Swiss-German, French and Irish).

Furthermore, he has two brothers Gary and Craig. From the beginning of his childhood, he had a keen interest in football and began to play at a very early age.

Terry began his professional football career at Pittsburgh Steelers in the 1970 NFL Draft.

A couple of years later in 1974, he won the first Super Bowl Championship with his team thrashing Minnesota Vikings.

In the next season, Steelers again won the Super Bowl 1975 defeating Dallas Cowboys.

However, in 1976, he suffered a wrist injury and couldn’t make it in four games.

Back in the 1982 NFL season, he suffered an elbow injury during a training camp and couldn’t play in the season thereafter.

It was the game against the New York Jets in the 1984 season, when his injury became worse and finally caused permanent damage.

Soon after that, he left and retire in 1984. Despite leaving football, he began to host a news channel.

In 1990, he started to serve as an in-studio analyst and co-host for Fox NFL Sunday. In addition, he has also authored five books which include his autobiography Terry Bradshaw: Man of Steel, FitzBradshaw Racing, and a few more.

Apart from that, the veteran American footballer has also released six-country, gospel, and Christmas music albums. Moreover, one of his singles ‘I’m So Lonesome I Could Try’ also climbed up Billboard’s Top 20 chart in 1976.

Furthermore, Terry has also starred in various TV shows such as Everybody Loves Raymond, Married… with Children, Malcolm in the Middle, and The League.

So far, Terry has won several awards in his careers such as the Pro Football Hall of Fame of the National Football League, 100 Greatest Football Players at number 44 by The Sporting News, and a few more.

Besides this, he has also become the Super Bowl Most Valuable Player in 1978 and 1979.

The debut episode of Terry and his family’s new E! reality series The Bradshaw Bunch will air on September 17, 2020.

Being a legendary football player, he earns a massive amount of money from his profession.

Currently, he pockets a mouth-watering amount of salary worth $5 million and a net worth of $45 million.

Once, Terry was dragged into a controversy after he made a statement regarding Reggie Bush in the NFL on Fox halftime show,

“Look at this Jimmy, like he was chasing that bucket of chicken that the wind was blowing the other day.”

Soon after his comment, many criticisms arose telling him a racist. Back in January 2017, he again faced controversy as he told Mike Tomlin a “cheerleader”. However, he later apologizes saying,

“I probably shouldn’t have said cheerleader”.

Terry has a towering height of 6 ft 3 inches and weighs 99 kg. He has a pair of blue eyes and salt & pepper hair.

How many rings does Terry Bradshaw have?

Has Terry Bradshaw ever lost a Super Bowl?