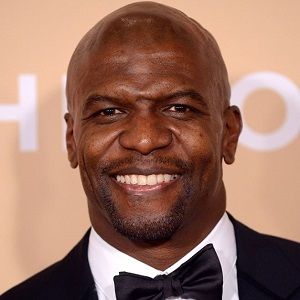 Never stop being YOU. I am out to be the best ME I can be. Do what you LOVE and you will be badass

By myself, I'm a hard pill. My wife makes me look real good, because she smoothes my rough edges. That's why I say, "Take your wife everywhere. It's a good thing."

Terry Crews is a married man. He tied the knot with his girlfriend Rebecca King after dating her for a couple of years. The couple exchanged their vows on 29 July 1990.

Since their marriage, the married pair have maintained a sound relationship with them. In addition, the couple has been spotted several times together as well. Apart from her, Terry has never involved in an affair.

Currently, Terry and Rebecca are enjoying their married life and living elegantly.

Who is Terry Crews?

Terry Crews is an actor and former American football player. He rose to fame after appearing in the TV series Everybody Hates Chris. Furthermore, he has also starred in several movies such as Brooklyn Nine-Nine, White Chicks, Norbit, Blended, and The Expendables.

Besides this, the veteran actor has also hosted a couple of hit TV shows such as Who Wants to Be a Millionaire, World’s Funniest Fails, and few others. Additionally, Terry has been also nominated for several Image Awards, Teen Choice Awards, Screen Actor Guild Awards, and a few more.

Terry was born on July 30, 1968, in Flint, Michigan, USA. Talking about his nationality, he is American and his ethnicity is African-American.

His childhood was not so easy as his father, Terry Crews, Sr. was an abusive alcoholic. Furthermore, he grew up with his mother, Patricia Crews.

Moving towards his education, Terry gained his high school diploma from Flint Southwestern. Later, he received an art scholarship at the Interlochen Center for the Arts followed by an Art Excellence scholarship and a full-ride athletic scholarship for football at Western Michigan University.

Terry Crews began his football career as Los Angeles Rams in the 11th round of the 1991 NFL Draft. Later, he also represented San Diego Chargers, the Washington Redskins, and the Philadelphia Eagles. However, he couldn’t continue his football career and later started his acting career.

In 1996, he co-wrote and co-produced “Young Boys Incorporated”. Later in 2000, Terry made his major acting debut in The 6th Day. Moreover, he also landed the famous roles in a couple of movies such as Serving Sara, Friday After Next, Deliver Us from Eva, and much more.

Additionally, this American actor has also starred as Hale Caesar in The Expendables series along with Sylvester Stallone and Jason Statham. Furthermore, he has also starred in several movies such as Brooklyn Nine-Nine, White Chicks, Norbit, and Blended. Besides this, the veteran actor has also hosted a couple of hit TV shows such as Who Wants to Be a Millionaire, World’s Funniest Fails, and few others.

In addition, he again came into the limelight after featuring as NYPD Sergeant Terry Jeffords in the Fox sitcom Brooklyn Nine-Nine. Recently in 2017, Terry has also acted as an American host for the 2017 Netflix original show Ultimate Beastmaster.

Being a famous American actor, he pockets a handsome amount of money from his profession. Currently, he has a net worth of $20 million.

So far, Terry has not won any awards in his career to date. Although, he has been nominated for several awards such as Image Awards, Teen Choice Awards, Screen Actor Guild Awards, and few more.

Once, Terry came into the headline after he told that he was sexually assaulted by Adam Venit. Besides this, he has never faced any controversy in his career and there are not any drastic rumors regarding his personal and professional life.

Terry Crews has a towering height of 6 ft 2 inches, weighs 111 kg with a muscular body. Furthermore, he has dark brown eyes and he is bald.

Additionally, his other body measurements include 50 inches chest, 18.5 inches biceps, and 37 inches waist.

Actor Terry Crews has a New Profession Now , Launches His First Ever Furniture Collection For The American Brand Bernhardt Design