Terry Dubrow is a well-recognized American plastic surgeon as well as a television personality.

An amazing personality, Terry Dubrow is happily living in a married relationship with Heather Dubrow. Heather is a well-recognized American actress as well as a television personality.

The duo met for the first time on a blind date. Similarly, they wedded on 5 June 1999. The couple is still together and shares many happy moments on their social media.

They have four children. The couple welcomed twins children, Nicholas and Maximillia in 2004. Likewise, they welcomed the next daughter in 2007, and finally, the youngest child was born in 2010. 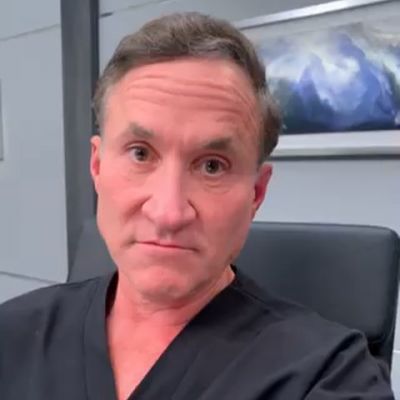 Who is Terry Dubrow?

Terry Dubrow is a well-recognized American plastic surgeon as well as a television personality. Dubrow is widely famed for his work on The Swan and for co-anchoring, Botched and its spin-off series Botched by Nature with Paul Nassir.

Moreover, he has also emerged on The Real Housewives of Orange County with his wife, Heather.

Terry Dubrow was born on 14 September 1958. At present, his age is 62 years old. Likewise, his birthplace is Los Angeles, California, the USA.

Terry is the son of his father, Alvin Dubrow whereas his mother is Laura Dubrow. Moreover, he has an older brother, Kevin Dubrow. Kevin was the lead singer for the famous metal band, Quiet Riot. Sadly, he passed away in 2007.

Talking about his nationality, Dubrow holds an American identity whereas his ethnicity is Ashkenazi Jewish.

Regarding education, the surgeon studied at the medical school at the University of California, Los Angeles School of Medicine, and graduated in 1986. He also completed his master’s degree from Yale.

Talking about Terry’s career, he is a well-named surgeon as well as a television personality. Dubrow made his private practice, providing cosmetic and reconstructive plastic surgery in Newport Beach, California. Later, he was approached by producers from Fox in 2004 to feature as a plastic surgeon on their reality series, The Swan.

In the summer of 2014, Terry and his fellow Real Housewives husband, Dr. Paul Nassif started appearing on their own plastic surgery reality show that is aired on E! called Botched. The show starred him and Nassif as they help people who had plastic surgeries go wrong. Earlier, the star featured in Bridalpasty.

Likewise, his second TV show was Good Work, a talk show managed by RuPaul, Terry Dubrow, and Sandra Vergara. In October 2015, Terry appeared in the eight episodes spin-off series of Botched. Other than that, he has featured as an authority on plastic surgery, reconstructive surgery, and non-surgical cosmetic procedures on Good Day LA, The Early Show on CBS, Larry King Live, and The View.

Along with his wife, Heather Terry wrote the book, Dr. and Mrs. Guinea Pig. They also explored the multi-billion dollar anti-aging business, giving a unique insight into which products, procedures, and treatments will leave people looking and feeling younger.

Freshly, Terry and his wife, Heather published the e-book, The Dubrow Keto Fusion Diet. Also, they have a skincare line formed over the last 15 years named Consult Beaute.

An American superstar, Dubrow has earned a massive amount of earnings from his multiple profession. He lives a lavish lifestyle along with his wife and children.

It is reported that Terry Dubrow has an estimated net worth of $50 million.

Likewise, his wife, Heather has an approximated net worth of more than $50 million. Similarly, in 2013, the couple sold their mansion for a reported $16.4 million and bought land in a new community where they have built new dream home.

Terry has never been part of any controversial matter or rumors till now. The multi-talented star has been preoccupied with his professional and private life.

It seems that Dubrow prefers enjoying his personal life and does not want to merge it with his professional life.

62 years old star, Terry Dubrow still looks young, energetic, and handsome. He stands at a height of 5 feet 6 inches. Also, he has a balanced body weight of 80 kg.

Furthermore, he has blue eyes whereas his hair is brown.

Nevertheless, the famed surgeon has never mentioned other physical details in the public yet.

Regarding his social media presence, Terry Dubrow is an active personality on social media. Terry has more than 943k followers on his official Instagram account @drdubrow.

He is also active on Twitter with around 310.4k followers.

Moreover, Dubrow is also available on Facebook with nearly 30.6k fans and supporters.