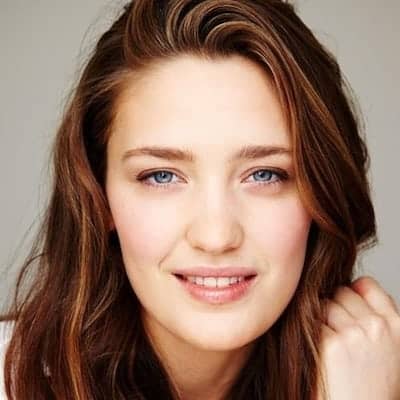 Tess Haubrich at present is possibly a single woman. She has not shared the details regarding her affair, husband, or boyfriend yet.

But in the past, she exchanged vows with an actor Nicholas Gell. It is reported that these two married in the year 2015 but their divorce date is not revealed.

Together, she and her ex-husband welcomed their first child, a daughter named Juniper Gell.

Who is Tess Haubrich?

Tess Haubrich is an actress and model of Australian nationality. Tess Haubrich is popular for her appearance in The Wolverine (2013), Alien: Covenant (2017), Spiderhead (2022), etc.

In 2009, she stepped into the screen industry with a short film titled Vinyl as Shayla. She is busy filming her TV show Last King of the Cross and her other project A Thousand Words (Short) is in the post-production process.

Her full birthdate is 01 April 1990 and she was born in Sydney, New South Wales, Australia. The name of her mother is Meredith Scott and her father’s name is Rodger Haubrich.

Further, her ancestry is Caucasian and as to her academics, she passed out from Pittwater High School. Then she enrolled at SCECGS Redlands.

Tess Haubrich has appeared in many screen projects. Recently, she was seen in the movie Spiderhead playing the role of Heather in 2022. This science-fiction thriller film featured stars like Chris Hemsworth, Miles Teller, Jurnee Smollett, and more.

The project is about testing the effects of emotion-altering drugs among the prisoners of the state. Spiderhead is directed by Joseph Kosinski and this film is inspired by the short story “Escape From Spiderhead” written by George Saunders.

Tess’s other film projects where she was seen in major characters are,

Similarly, she has shown her acting skills with major roles in TV shows named Home and Away as Shandi Ayres, Bad Mothers as Sarah, and Treadstone as Samantha.

By the reports of 2022, Tess Haubrich has an estimated net worth of $2 million which she collected from her work.

The cast of 2017’s movie Alien: Covenant is keeping herself away from scandals along with desperate rumors.

Tess Haubrich’s height is 5 ft 10 inches and her body weight is average. Furthermore, she has light brown hair and her beautiful eyes are hazel in color.