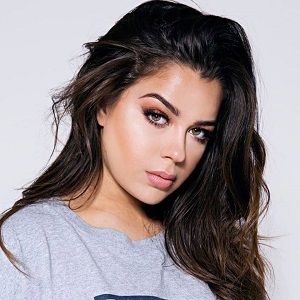 The 18-year-old American YouTuber, Tessa is an unmarried girl. Previously, she was in a relationship with YouTuber Chance Sutton. The couple started dating in 2017. After dating him for several months, they split up. Soon after that, her name was also linked up with YouTube sensation Jake Paul in February 2017. Although, neither of them confirmed their news and it came as a rumor. Currently, Tessa is enjoying her single life and living elegantly.

Who is Tessa Brooks?

Tessa Brooks is an American YouTuber, model, and dancer. She is famous as a member of imam BEAST dance crew. Furthermore, she is a social media celebrity in which she has more than 5 million followers on Instagram and almost 830k followers on Twitter. Being a YouTuber, she has earned over 3 millions of subscriber.

Tessa was born on April 5, 1999, in California, United States of America. Talking about her nationality, she is American and her ethnicity is unknown. From the beginning of her childhood, she had a keen interest in dancing and also began to learn from the very early age. Moving towards her education, there is not any information regarding her educational background.

Tessa began her career as a dancer. Later, she joined the immaBEAST dance crew. Furthermore, she has also performed with The Pulse on Tour. Besides dancing, Tessa has also done modeling for famous brands such as Skechers, Contours Designs and Coca-Cola. So far, she has performed in several events, the Miss California Pageant, the Haiti Benefit Concert and Disney’s Next Big Thing.

Furthermore, she is a social media celebrity in which she has more than 5 million followers on Instagram and almost 830k followers on Twitter. Being a YouTuber, she has earned over 3 millions of subscriber. In addition, she has also worked with Jake Paul, Erika Costell, and Chance Sutton in Team 10. Some of her hit YouTube videos are Powerful Emotions, HICKEY PRANK ON CHANCE, CHANCE MOVED IN WITH ME, and few others.

Being a famous YouTuber and dancer, she earns a healthy amount of money from her profession. However, her salary and net worth are unknown.

As of now, Tessa has not won any awards in her career. Although, she has been doing a great job in her field and her works have been li=oved by many people around the world.

Tessa Brooks: Salary and Net Worth

Once, there was a controversy after Tessa was kicked out from their house after accusing her of cheating on Jake Paul. Later, she also revealed that she is out from Team 10. Besides this, she has never faced any controversy in her career.

Tessa has a height of 5 f 7 inches and weighs 57 kg. Moreover, she has a pair of hazel eyes and dark brown hair. Additionally, her body measurements include 34 inches bra, 25 inches waist, and 36 inches hip size.

Tessa is pretty active on social media such as Instagram and Twitter. Currently, she has more than 5 million followers on Instagram and almost 830k followers on Twitter. Additionally, she also runs a YouTube channel in which she has gained over 3 million subscribers.