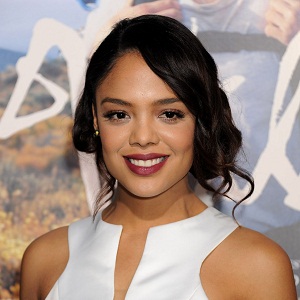 'Veronica Mars' was my first job, and for some reason, my character changed her hairstyle halfway through the season from curly to - I don't even know why - suddenly straight

The term 'breakout' always makes me think of an inmate or some butterfly emerging out of a cocoon.

Tessa Thompson is currently in a relationship. She is dating a guy named Lightspeed Champion.

She was in a relationship with Ben Crowley and Janelle Monáe (2018). At present, she is focussing on her career.

Who is Tessa Thompson?

Tessa Thompson is an actress well known for her roles in When a Stranger Calls, Creed, and Dear White People in 2006, 2014, and 2015 respectively.

Besides being an actress, she is a musician too. She took part in some series like Jackie Cook, Veronica Mars, period crime drama Copper, For Colored Girls, and Westworld.

Tessa Thompson was born on 3 October 1983, in Los Angeles, California, USA. Her nationality is American and ethnicity mixed (Panamanian, half Mexican and half European).

Her birth name is Tessa Lynn Thompson. She was a granddaughter of actor and musician Bobby Ramos and daughter of singer-songwriter Marc Anthony Thompson (father).

Her mother’s name is not revealed but she has siblings, Zsela Thompson (sister), a half-sister, and a half-brother from the paternal side.

She went to Santa Monica High School and then Santa Monica College where she got her education in the early days where she studied cultural anthropology.

When she was a child she used to go thrift stores with her parents. She used to do acting on her school days.

Being a daughter of singer-songwriter Marc Anthony Thompson, she gave her first appearance on theater in 2002, in  Los Angeles Women’s Shakespeare Company’s production of The Tempest. In 2003, she became Juliet on her next theater appearance on the play named Romeo and Juliet.

In 2016, Tessa Thompson attended the Broadway run of the Lydia R. Diamond play. Then when she was prepared for her acting skills she made her tv appearance in 2005 for her role as the bootlegging lesbian from the 1930s. In 2010, she appeared as the wife of a detective on Detroit 187 and Gavin Doran’s daughter, Sasha, on 666 Park Avenue in 2012. BBC America’s first original series Copper.

Finally, she played a role where she was named Scarlet in 2006 on a movie named ” When a Stranger Calls“. In 2008, she was selected for a dance movie named  Make it Happen.

In 2014, she appeared on Justin Simien’s Sundance winner Dear White People. She played a role in “The Grand Romantic” in 2015. She also appeared on Thor: Ragnarok and in Men in Black: International (2019).

Currently, there are no details regarding salary and the net worth of her is estimated at around $4 million.

There are some rumors shown on some social media that the talented actress Tessa will appear in Avengers: Infinity War soon. There are no other rumors related to this actress.

She has been hiding her personal life status and she is working on her career currently.

Tessa Thompson has a height of 5 feet 4 inches. Her body weighs 55kg. She has black hair and dark brown eyes. Her body measurements are 34-27-35 inches.