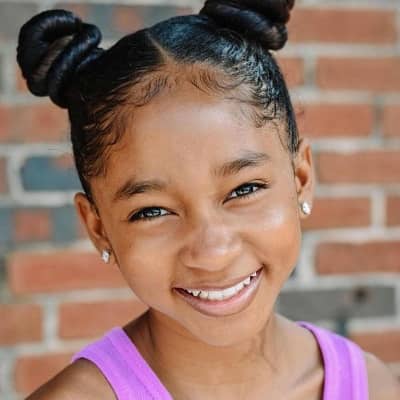 Facts of That Girl Lay Lay

That Girl Lay Lay is just 12-years old. She is still at her young age to be in any relationship as of now. There are no such things in her life yet.

Currently, the rapper is working hard to settle in the music career. She may be blessed with a beautiful relationship in her future days.

Who is That Girl Lay Lay?

Alaya High, better known as That Girl Lay Lay is a hip-hop artist. She is one of the youngest female rappers to sign a record deal with Empire Records.

Her debut single is called “Go Lay Lay Go.” In 2020, she signed an overall deal with Nickelodeon.

Her father’s name is Acie High. Acie has not just inspired her to become a singer but has also motivated her to turn vegan. He has been following a vegan diet for several years now, and Lay Lay is following in his footsteps.

Details about her mother are still unknown. Talking about her nationality, its American, and she belongs to Anglo-Saxon English ethnicity.

She is still at her young age and maybe studying a high school education.

That Girl Lay Lay has her own self-titled YouTube channel which she opened on May 28, 2018. As of now, she has acquired around 1.5M subscribers on the platform.

The first part of ‘THOTIANA FREESTYLE’ has earned more than six million views being the highest views videos of her channel. She started sharing her pictures and videos on Instagram from 2017. Lay was viral after performing freestyle over BlocBoy JB’s “Shoot.” NO sooner, she was one of the youngest celebrities earning fame overnight.

Her social-media fame helped her earn a contract with ‘Empire Records,’ making her the youngest artist to be signed by a label, leaving behind the rap duo ‘Kriss Kross’. Its other members are Chris “Mac Daddy” Kelly and Chris “Daddy Mac” Smith, were 13 and 14, respectively, when ‘Ruffhouse Records’ had signed them.

Lay shared the news on August 2, 2018, through an Instagram post that she is releasing her album. And her first album, ‘Tha Cheat Code,’ was released under the label ‘Empire,’ along with her debut single, ‘Go Lay Lay Go.’

Previously she has released a freestyle performance on Drake’s ‘I’m Upset.’ Lay has also worked in music with Dillon Francis and T-Pain for The LEGO Movie. The rapper even performed at LEGOLAND and even The Ellen Show.

Lay also performed in the Bank Of Springfield Center in Central Illinois on December 13th, 2019. She has made an appearance on Nick Cannon’s Wild-n-Out. Nick posted that she will also be part of other projects along with him.

Her popularity reached a different level when she appears on ‘The Ellen DeGeneres Show’ for a live performance. During the performance, Lay Lay was seen mimicking the styles of a few contemporary rappers.

On the show, she also listed celebrities such as Cardi B, Lil Baby, Gunna, and Rihanna as her favorite music artists and sources of inspiration.

She even had a partnership with the jewelry brand Alex and Ani. It also raises so much attention that the site crashed. She became an overnight sensation is now one of the well known youngest freestyle celebrities.

Furthermore, Lay has her own website where she sells a collection of the lip gloss range, named ‘Lyrics,’. It comes in an attractive microphone-shaped metallic packaging and in a variety of flavors also with her signature.

As of now, she signed an overall deal with Nickelodeon in 2020 and working with them.

In a short span of time, she has amassed a good amount of money from her career. Lay’s net worth is said to be around $90 Million.

Her income source is from her music career, different endorsements, videos advertisement, and YouTube.

Likely, her salary is estimated at around $6K to $8K. Further, she resides in her luxurious and beautiful housing in Texas, US.

She hasn’t been in an incident that could create any rumors about her. Moreover, the star is also far from being in any controversy until now.

Lay has garnered more than 2K followers on her TikTok account but she hasn’t published any videos yet. Furthermore, she has her own YouTube channel around 1.5M subscribers.

Also, get to know about Mia Hayward, Addison Rae, and Larray.