Thayana Sco Jackson’s marital status is married. She gets married to her long-term boyfriend Taj Jackson who is a famous pop singer.

He is also a member of the 3T music group along with his younger brothers. The couple exchanges their vows on June 16, 2013, in Jackson’s Hayvenhurst home.

On November 21, 2018, the couple blessed with a daughter named Taylor Aurora Sco. Now, the pair were expecting their second child.

Moreover, the detailed information regarding her past relationship is unknown. 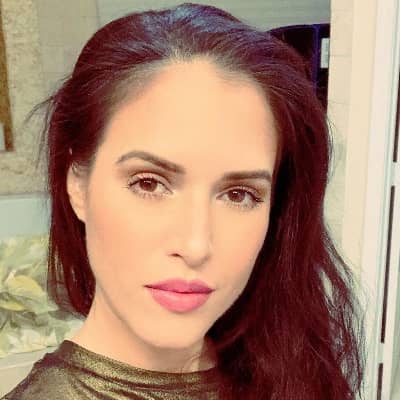 Who is Thayana Sco Jackson?

Thayana Sco Jackson is an American actress, singer, and songwriter by profession. She is a member of Scotriplets, a music group.

She is better known in the public as the wife of popular Pop singer, Taj Jackson.

Thayana was born on November 10, 1984. She hails from Brasilia, Brazil, and currently, she resides in Los Angeles, California. She holds a Brazilian nationality.

Thayana’s father named Jansen de Oliveira is a guitarist. Likewise, her mother’s name is Paloma de Oliverirs she is also a singer who performed regularly in church. She has also two sisters named Thaina Sco and Thaisa Sco.

Three of them are triplet sisters. She is the youngest one among two sisters.

Thayana also hasn’t yet disclosed her academic background too.

From the age of three, Thayana began to perform alongside her sisters, Thaina Sco and Thaisa Sco in different cities of Brazil like Brasilia, Sao Paulo, and Rio de Janeiro.

Then, she moved to Paris with her sisters where they began recording their own songs which caught the attention of the president of a BMG Music label who immediately signed them to a recording deal.

Similarly, they signed with a number of French television channels including TF1, and were also sponsored by Coca-Cola. Likewise, their music reached #1 in several countries and they sold nearly two million copies in North Africa, Europe, and parts of Asia.

Then, they moved to America where they appeared in several commercial ads such as Vitamin Water Triple Berry, and more. They sang the American National Anthem for the LA GALAXY game at the Home Depot Center.

The triplets also released their single, “Rhythm of The World” which hit more than 1 million views on Facebook too. In 2015, she appeared in the reality television program, The Jacksons: Next Generation aired on Lifetime.

Until now, she has not been part of any disputes and scandals that appeared as the headline of the media. Moreover, she prefers to keep a low profile.

Thayana has not revealed any of her real estate or salary to the public. As of 2022, she has an estimated net worth of $500k. But, she might have earned a handsome amount of wealth from her profession as an actress.

In addition, she has a band named scotriplets and performed along with her sister. Taking about her husband’s net worth, he has an estimated net worth of $2.4 million.

From her appearance, she seems tall in height. She has brown pair of eyes with black hair dolor.

Moreover, the detailed information about her other body measurement is unknown.