WWE wrestler The Great Khali origins from Punjab, India. He is a daughter. 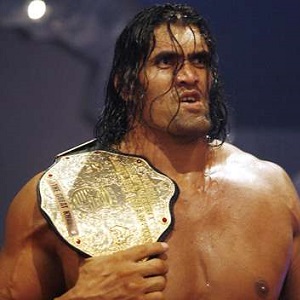 Quick Facts of The Great Khali

It's the small things that will make you successful

Dancing along with family members and old friends, especially during a marriage, is a memorable experience

The wrestling is real, all the injuries are real, so much so that in no other sports, whether soccer or cricket or hockey, players get so many injuries as in WWE.

Relationship Facts of The Great Khali

The Great Khali is a married man as of now. He is married to a girl named, Harminder Kaur. The couple tied the knot on 27 February 2002. They have a beautiful baby girl together named Alveeen Rana.

Her wife gave birth to his daughter on 26 February 2014 at a hospital in the US.

Other than this relation, there is no information about him being in other relations. As of now, they are living happily with each other. There are no signs of separation or divorce.

Who is The Great Khali?

India-born The Great Khali is a professional wrestler. Additionally, he is also an Indian promoter, actor, and powerlifter. On July 17, 2007, he won the title of “WWE Heavyweight Champion”.

Presently, he wrestles in his own opened wrestling school, “Continental Wrestling Entertainment”. Similarly, he is popular starring in several Hollywood and Bollywood movies.

Khali was born in the state of Himachal Pradesh of India on August 27, 1972. His nationality is Indian and his ethnicity is Indian (Punjabi).

His birth name is Dalip Singh Rana. He was born to his parents, Jwala Ram(father) and Tandi Devi(mother).

His family followed Hinduism. Consequently, he grew up in a Hindu family. Khali was born and grew up in a poor family.

As per his education, there is no information regarding it.

The Great Khali started his career as a police officer. He initiated his wrestling career in All Pro Wrestling (APW) in 2000.  He wrestled under the ring name, Giant Singh. Afterward, he wrestled in companies like, “World Wrestling Championship”, “New Japan Pro Wrestling”, and others.

He rose to fame after he joined World Wrestling Entertainment (WWE) in 2006. Under WWE, he wrestled in Deep South Wrestling. Afterward, he got involved in various feuds with other wrestlers. During 2006 and 2007, he defeated Rey Mysterio and The Undertaker.

After being drafted to the RAW brand, he won the title of “WWE Heavyweight Champion” On July 17, 2007. Similarly, he went on to win several titles. He was on-and-off with the WWE. In November 2014, his contract with the WWE expired. Then in 2015, he opened his own wrestling school in Punjab, India.

As an actor and TV personality, he has starred in several TV shows. Additionally, he appeared in films like, “The Longest Yard”, “MacGruber”, “Kushti”, and others.

This wrestler has a net worth of $6 million. The Great Khali earns a salary of $970k per year and he also earns some portion of his net worth from brand endorsement which is nearly equal to $225k per year.

Khali was part of the controversy back in 2001. Khali’s flapjack killed a wrestler named, Brian Ong. Although Khali wasn’t the one to blame as it was a mistake of “All-Pro Wrestling” who under-examined his injury.

The Great Khali has a height of 7 feet 1 inch. His body weighs 157kg. He has black hair and dark brown eyes. Furthermore, there are no details regarding his body measurements.