Michael Gregory Mizanin is an American professional wrestler. The Miz is a married man as he married his longtime girlfriend Maryse Ouellet.

The Miz is a married man as he married his longtime girlfriend Maryse Ouellet. She is a French-Canadian fellow WWE wrestler. They married in The Bahamas on February 20, 2014. Similarly, their daughter Monroe Sky Mizanin was born March 27, 2018.

After that, the family moved to Austin, Texas. On February 17, 2019, they announced that they are expecting their second child, due in September. 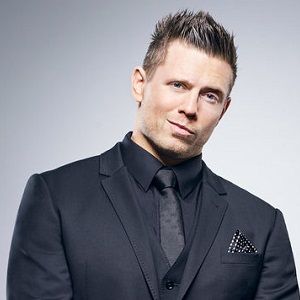 Quick Facts of The Miz

Relationship Facts of The Miz

Who is The Miz?

Michael Gregory Mizanin is an American professional wrestler who plays under the ring name The Miz. He is also known as actor and media personality. Likewise, he is currently signed to WWE where he performs on the Raw brand.

He became popular after being the cast of MTV’s The Real World: Back to New York in 2001.

He was born on 8th October 1980, in Parma, Ohio, U.S. He is the son of George Mizanin and Barbara Pappas. Similarly, his parents divorced when he was just 11 years old and started living with his mother and step-father Donnie.

Likewise, he has two half-sibling brothers named Johnny and Tonia. Similarly, his father George owns several Mr. Hero sandwich shops in the Cleveland area. His nationality is American and his ethnicity is mixed with Greek, Slovak, Romanian, German and English.

Talking about her education, he attended Normandy High School and was the captain of its basketball and cross country teams. Similarly, he also participated in swimming and was a member of the student government and the editor of his high school yearbook.

Likewise, he enrolled at Miami University, where he was a member of the Theta Chi fraternity. he studied business at the Richard T. Farmer School of Business.

The Miz: Professional Life and Career

He first gained fame as a reality television participant. As he was a cast member on MTV’s The Real World: Back to New York in the year 2001. After that, he appeared in its spinoff series, Real World/Road Rules Challenge from 2002 to 2005. He reached the finals in The Gauntlet and The Inferno while winning Battle of the Seasons and The Inferno II.

Similarly, he reached the final in Battle of the Network Reality Stars and won a 3-part Reality Stars-themed episode of Fear Factor in 2006. After becoming the runner-up in the fourth season of Tough Enough he appeared on Diva Search, Total Divas, and Tough Enough. After that, he and his wife Maryse also starred in their own reality show titled Miz & Mrs. which premiered in the year 2018.

Likewise, The Miz has also come to star in several films produced by WWE Studios, portraying Jake Carter in The Marine 3: Homefront, The Marine 4: Moving Target and The Marine 5: Battleground and many more. Similarly, he is one of the 10 most prolific pay-per-view performers in WWE history. He has headlined several pay-per-view events for WWE, including the 2011 edition of WWE’s flagship event WrestleMania.

He has a net worth of $9 million as of 2019. He earns a huge amount of money from his career. Similarly, his base salary is $1.2 Million per year. He receives a lot of bonus money from winnings and for his face on the WWE merchandise.

Likewise, he also earns from the Pay-Per-View scheme. Also, he endorses the WWE merchandise related to WWE SmackDown. Similarly, he owns a house in Hollywood Hills worth $3.65 Million. But he bought the house for $1.865 million five years before. He is known to own several luxurious cars including Audi.

The Miz: Rumors and Controversy/Scandal

Talking about the body measurements of The Miz, he has a decent height of 6 feet 2 inches and his weight is 100 kg. His hair color is brown and he has blue color eyes.