‘The One That Got Away’ star Ashley Algarin is Mother to Daughter Riley Rosalena! 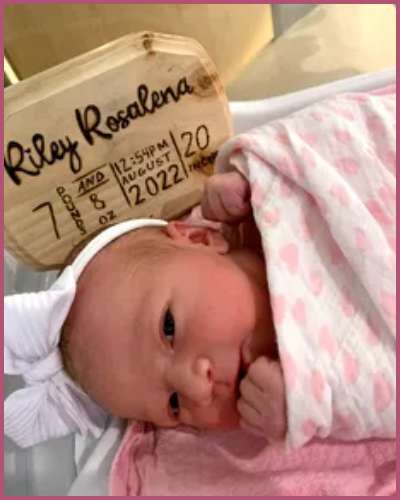 Ashley Algarin is officially a mom to daughter Riley Rosalena! She has yet t9 confirm her baby’s paternity and relationship term with Quinn Wentel.

Just a month after The One That Got Away star Ashley Algarin welcomed a baby girl. The daughter Riley Rosalena was born on Sunday, Aug. 21, at 12:54 pm.

More into the baby of Ashley and her relationship

As a part of The One That Got Away hosted by Betty Who, Ashley Algarin walked away with her ex Quinn Wentel who popped out for the Portal just to get back to her. Meanwhile, You heard it right he is not the baby’s father as Ashley ends up seeing someone else.

Immediately after quitting the show with one of her exes, she met someone else. It was ER nurse Alan Andrews who she fell in love with and is planning to co-parent the baby which news excite them as she said,

“Alan and I are so very in love with her already.”

The Ohio native had announced that she is pregnant with baby daddy Alan in April 2022 following her tenure on a dating show ended by saying,

“I’ve been keeping a precious secret. My mini-me will be making HER debut in August 💗.”

Also, Read Lauren Goodger Flaunts her New Tattoo! It was Inked with her Late Daughter’s Ashes

Who is Ashley Algarin from The One That Got Away?

Ashley Algarin is a 27-year-old reality TV star featured in Amazon Prime’s dating show The One That Got Away. She is a baseball enthusiast, part-time model, and CT and X-ray Tech expert as her Instagram bio of 5k followers read.

She participated in the very first season as a part of six singles searching for love that they knew but were interested in to see if missing connections could change their faith in love.

Unlike other reality dating shows, the single contenders were guided to find love and explore missed connections as people from their past entered through “The Portal.”

The other contestants in the show were Jeffrey Perla, Allyssa Anderson, Kasey Ma, Vince Xu, and Kyle Dean Freeman. All the episodes of The One That Got Away are available to stream on Prime Video since July 22, 2022.

Tags : 'The One That Got Away’ Amazon Prime's dating show American CT Scan technologist