The Secret Behind The Survival Of Roman Concrete From The Tidal Battering For 2,000 Years Finally Revealed

Updated On April 5, 2022 | In Interesting Facts , Lifestyle , Relationship
Share this 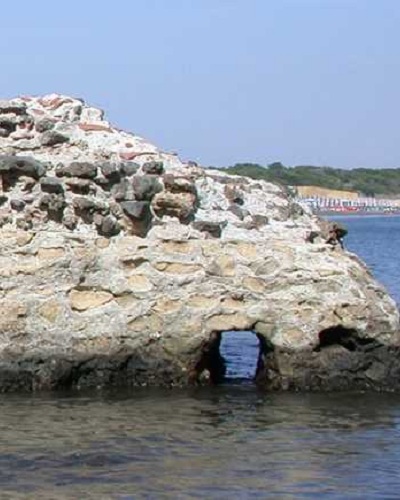 It was a mystery that continued to baffle even modern engineers. Why do the two millennia-year-old Roman piers survive to this day, but the modern concrete sea walls which are entrenched with steel tend to crumble within decades?

Even Pliny the Elder, noted in Naturalis Historia in 79AD, that concrete structures in ancient harbors, ‘become a single stone mass, impregnable to the waves, and every day stronger,’ despite being constantly battered by sea-water.

The mystery may have been finally solved now as indicated by a group of US scientists.

A group of scientists in the US conducted a study to know the reason behind its longevity. For the research, samples from an ancient Roman pier called Portus Cosanus, which is located in Orbetello, Italy, were studied with high-intensity X-ray beams.

The research was published in the journal American Mineralogist.

The group discovered that when salt water was mixed with the volcanic ash and lime as used by Roman builders, it led to the growth of interlocking minerals, which brings about a practically impenetrable cohesion to concrete.

said Marie Jackson. A geology and geophysics research professor at the University of Utah, Jackson was the one to have led the study.

Chemistry of the Roman Structures

Back then, Roman engineers made concrete by mixing volcanic ash with lime and seawater to make a mortar. Then, they added chunks of volcanic rock.

This combination then goes on to produce what is known as the Pozzolanic reaction. That reaction triggers the formation of crystals in between the gaps of the mixture as it sets. The reaction was named after the city of Pozzuoli in the Bay of Naples.

The same reaction also happens in nature on its own. The lumps of such natural cement, known as ‘tuffs,’ are often found dispersed around the volcanic areas. This must have been something that gave the Romans the idea for their durable cement technology.

You may also like to read Interesting facts related to the education of North Korean dictator, Kim Jong-un!

Comparison With the Modern Concrete

In contrast to Roman concrete, most modern concrete is a mix of Portland cement: limestone, sandstone, ash, chalk, iron, and clay, among other ingredients.

They are then heated to form a glassy material that is finely ground, mixed with sand or crushed stone that are not intended to chemically react, and so do not cause mineralization when mixed with salt water.

Implications in the Modern World

Since the exact recipe for that ancient Roman concrete has been lost, the team is working with some geological engineers to find an alternative using seawater from San Francisco Bay and volcanic rock from the Western US.

If they succeed in it, it will allow builders to construct sea defenses that last for centuries while also being beneficial for the planet.

“Romans were fortunate in the type of rock they had to work with,”

“They observed that volcanic ash grew cement to produce the tuff. We don’t have those rocks in a lot of the world, so there would have to be substitutions made.”