Posted by MarriedBiography Posted on November 9, 2020 | In Married , Wedding
Share this 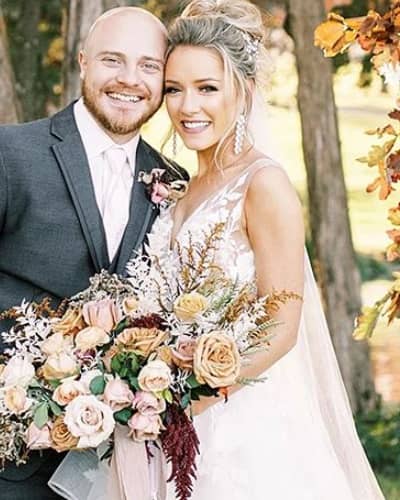 American country singer Emily Ann Roberts known for The Voice is married now. She walked down the aisle with a boy she met in her high school Spanish class named Chris Sasser.

Their wedding ceremony was an afternoon service on the picturesque grounds of Marblegate Farm in Friendsville, Tennessee, Roberts.

“We decided two weeks before to get married outside, which was never the original plan, but we knew it would be the best decision for everyone’s safety,”

“The fall season has always been a favorite of ours, especially with growing up so close to the Smoky Mountains. We always make trips to the mountains to see the gorgeous colors of the leaves before they fall, so when we were picking our wedding date and colors, we knew we wanted to pull inspiration from the beautiful colors of fall in East Tennessee.”

They got engaged on 28th October 2019 after Chris proposed to her. She thanked God for bringing him to her life. At their wedding, Emily wore an exquisite bridal gown designed by Wtoo by Watters.

She purchased the gown earlier in 2020 from Lillian Ruth Bride in Knoxville, Tennessee. When she tried the dress, she felt like a bride. She burrowed the veil from her elder sister Abigail and carried her nana’s handkerchief in hand.

More on her wedding

Similarly, she walked down the aisle on a song Infinity which she wrote along with Stephanie Chapman. She claimed that her song was about her relationship with Chris. They both have faith in Jesus and her lifelong pastor Todd Halliburton officiated their wedding.

In their reception, Emily changed into a BHLDN Weddings dress which was designed by By Watters, and shoes by Bella Belle Shoes. They served macaroni and custom made cheese at their reception. For their dessert, they served s’mores and red-velvet mini cupcakes as well as chocolate chip and oatmeal cream pie mini Sammie cookies.

Emily Ann Roberts after ‘The Voice’

After appearing on the ninth season of The Voice, she released her first album The Voice: The Complete Season 9 Collection on 15th December 2015 with label Republic Records. After that, she released her another album Bigger Than Me in 2017 and Someday Dream on 12th July 2019.

Her other singles are In the Garden, Blame It on Your Heart, Why Not Me, She’s Got You, 9 to 5, Burning House, Islands in the Stream, Blue Christmas, Silent Night, Stuck On Me + You, I Got Forever, and Someday Dream. She shares her music videos on her YouTube channel.

Also read Actress Yara Shahidi who is the voice of Gen Z posted an emotional video in the wake of the mass shootings in Ohio and Texas this weekend!

Also, Emily is on TikTok with 28.8k followers and has 155.3k likes. Recently, she made a video of her and her bridesmaid transforming into the wedding dress.