Theo James is an English actor and producer. Theo's wife Ruth Kearney was his co-star.

Theo’s wife Ruth Kearney too has a well-deserved reputation as an actor. Ruth played the role of London who is a serial killer in the Netflix TV series “Flaked”. And now she is seen as Becca Morgan in the TV series “Get Shorty”. 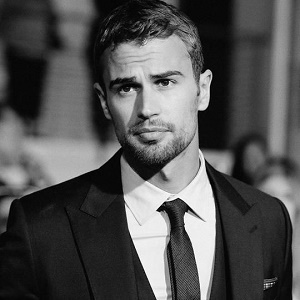 I've got two brothers and two sisters, so there's five of us and we're all very close, which is cool.

Even though I'm an actor, I don't love sharing everything about myself. It's always good to keep a little bit for yourself.

Don’t never think that you haven’t got anything to learn.

Who is Theo James?

Theo James is a young and popular English actor. Theo is also a director, producer, musician, and ambassador for peace.

He is known for his role in Bedlam, Golden Boy, and Tobias Four Eaton in the film adaptations of The Divergent Series.

He starred in the 2014 film Divergent alongside Shailene Woodley. Theo won the teen choice award.

His parents are father, Philip Taptiklis who is a business consultant, and mother Jane who are of Greek, English, Scottish ancestry.

Theo was raised in Askett, Buckinghamshire, England, and is the youngest child in the family of seven.

He did his undergraduate degree in philosophy from the University of Nottingham, in Nottingham.

Theo worked at the National Health Service in England.

He also sang and played guitar for Shere Khan, a London-based band before starting his career as an actor.

Theo started his acting career in the series A Passionate Woman in 2010 starring opposite Billie Piper.

He also played for Downtown Abbey as Kemal Pamuk, a Turkish Diplomat.

His Movie Credit includes You Will Meet a Tall Dark Stranger as Ray, The Inbetweeners Movie as James in 2011, Underworld: Awakening, Divergent, The Benefactor.

He also did Television series like Case Sensitive Room at the Top and Golden Boy as Walter William Clark, Jr.

He has 2 upcoming movies this year Underworld: Blood Wars and Backstabbing for Beginners.

In June 2016, James traveled to Greece with UNHCR, where he met Syrian refugees and learned more about the situation for refuge. He also called for greater humanitarian aid for people displaced by the Syrian Civil War.

Theo James has auburn hair and dark eyes. His height is 6 feet and weighs 78kg.