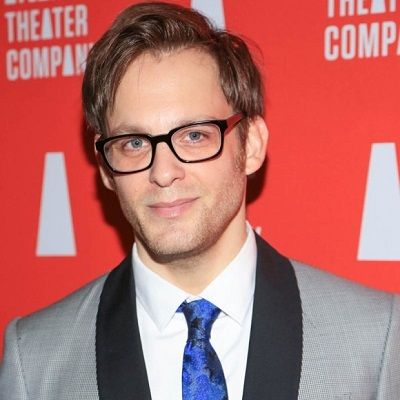 I think that Dionysus was, in a way, the original hippie. He was the Greek god of wine and sex and debauchery-he originated free love! The version of Dionysus that I played was kind of a Robert Plant-like rock 'n' roll hero: very sexy and wild, but with an incredible fury and thirst for revenge that I really loved tapping into. I used to listen to "Raw Power" by Iggy &

the Stooges before the show to get that ferocity. I think we all want to be rock stars in some way-that power of freedom and fearlessness. So I think Dionysus is definitely inside me in some ways.

I've always been attracted to the dark side of people-exploring qualities that I myself don't possess or am afraid of.

Previously, he was in a relationship with the actress, Lea Michele. The started dating from October 2009. However, after two years of relationship, they broke up with each other in September 2011.

Who is Theo Stockman?

American Theo Stockman is a Tony Award-winning actor. He is renowned as Josh of the series Bonding.

Last, in 2017, he appeared in the movie, The Boy Downstairs as Eliot.

Theo Stockman was born on the 27th of December 1984 in Brookline, Massachusetts. He is of British-Dutch-Germanic ethnicity.

His father, Mark Stockman is a physician whereas his mother, Jayne Anne Phillips is a novelist by profession. Last, in 2013, Jayne published her latest novel, Quiet Dell.

He has a brother. Also, he has two half-brothers from his father’s side.

He explored the idea of the theater when he was only seven years. At the time, he went theatre for the first time to see the show, The Nutcracker. Also, he loved the idea of performing.

Later, he went to the boarding school, Concord Academy. In school, he started experiencing the plays as an artist. After that, in the senior year of his High School, he performed the stage adaption of the novel, The Perks of Being a Wallflower.

Later, in 2007, he graduated from the Tisch School of Arts with honors in Fine Arts. Also, he was associated with the acting school, Stella Adler Studio of Acting, and attended the international workshop of acting in Amsterdam.

Theo Stockman started his career as a stage artist and performed in numerous plays like Slainte as Ken, An Early History of Fire as Danny, and The Fairy Garden as Roman.

However, he made his debut on Broadway with the play, Hair as Tim Price. The play ran for 2 years from 2007. Under Broadway, he made his appearance in the plays like American Idiot, The Last Goodbye, and American Psycho.

Apart from theater, he is a popular face in the TV series too. Back, in 2003, he first appeared series, 30 Rock as Ephraim. Moving forward, he made his appearance in the series like Law & Order: SVU, Made in Jersey, and Private Practice as a guest star.

In 2013, he debut in the movies with the film, Home where he appeared as Charles. Later, he featured the movie 2014- A Good Marriage and 2017- The Boy Downstairs.

As of now, he has maintained a clear image as an actor. Till the date, he has not been through any sort of controversy that created a buzz in the media. Similarly, there are no rumors linking with him.

Theo Stockman has blue eyes with light brown hair. He has a decent height and weight with Mesomorph body type.

Lea Michele confessed she does not want to preggers anytime soon and the reason is hilarious. Know about her engagement and fiance