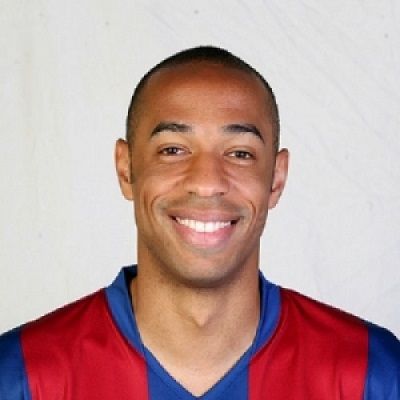 At the beginning, you are 20 and you can just imagine... don't get me wrong, but having money. Then you realize that it's not only about you and what you are doing but that you have to give back.

I can't understand why [Paul] Scholes has never won the player of the year award. He should have won it long ago. Maybe it's because he doesn't seek the limelight like some of the other 'stars'.

Thierry Henry married Nicole Mary, also known as Claire, who is an English model and they had a child together, named Tea, two years after their wedding. But within 5 years of their marriage, the couple divorced in December 2008.

Who is Thierry Henry?

Thierry is a French professional football coach and former player who was most recently the manager of Ligue 1 club Monaco.

Likely, Henry also made his professional debut with Monaco in 1994, where good form led to an international call-up in 1998, after which he signed for defending Serie A champions Juventus.

Thierry Henry was born on  August 17, 1977, in Les Ulis, France. His birth name is Thierry Daniel Henry and he is currently 42 years old. His father’s name is  Antoine Henry and his mother’s name is  Maryse Henry.

Right before his birth, his parents left the French Antilles to make a better life for themselves. They moved to a ghetto-like neighborhood. Whereas, his parents separated and his mother took him to Orsay.

Talking about his profession, Henry signed an apprentice contract with the manager of the Monaco team, Arsene Wenger. Additionally, he made his first professional appearance in football in 1994 in a 2-0 loss against Nice. He was put on the left wing by Wenger.

In the year 1996, Henry became France’s Young Player of the year under the guidance and training of Arsene Wenger. He led France’s Under-18 team to the European Championship and scored 7 goals in the competition.

As a result of his splendid performances at other tournaments, he became a part of the French FIFA World Cup 1998 team. He continued to play for Monaco and impressed everyone with his brilliant performance. He scored 20 goals in 105 matches.

During 1999, Henry left Monaco and became a part of the Italian Series A club Juventus. He was paid a sum of 10.5 million pounds to join the team. In the same year, he scored his first goal for the team, two in a 3-1 defeat of league leaders Lazio.

After some time, he was transferred to Arsenal for a sum of 11 million pounds and there he was untied with his old mentor Arsene Wenger. Wenger made him into a striker and he went off the mark in 1-0 win over Southampton. In the year 2000, Henry’s second season with Arsenal was successful as he became the team’s ace goal-scorer. The team reached the finals of the FA Cup but lost 2-1 to Liverpool.

Similarly, in 2002, Henry became the top goal-scorer of the league and scored a total of 32 goals in all of the matches. Eventually, he helped Arsenal to a double and received his first silverware with the club. In addition, he played against Uruguay in the World cup finals.

During 2005, Henry helped his club Arsenal win FA Cup but he suffered from a knee injury which kept him out of the final match against Manchester United. He became the top-scorer in the history of Arsenal. Likewise, in 2006, he scored his 200th goal for his club Arsenal in a winning match over Birmingham.

Also, he captained his club Arsenal in their first Champions League final. He also signed another 4-year contract and stayed with Arsenal, turning down 2 high paying bids from Spanish clubs. In the year 2007, Henry joined Barcelona for 24 million pounds. He scored his first goal for his new club in a 3-0 Champions League win over Olympique Lyonnais. He could not score as well as he used to do in Arsenal.

He scored his first goal for the club in a 2-0 victory against San Jose Earthquakes. Whereas, from 2011-2012, Henry went back to Arsenal for a 2-month loan deal; he covered for Gervinho and Chamakh when they were participating that year in the Africa Cup of Nations. He played against the Leeds United in the FA cup. During 2012, he went back to the Red Bulls and gave his first hat-trick for the club in a 5-2 against Montreal Impact.

He was a member of the FIFA World Cup 1998 winning French team and also part of the UEFA European Football Championship 2000 winning team. He also helped his team win the FIFA Confederations Cup and King Hassan II International Cup Tournament in 2000.

Thierry Henry has an estimated net worth of around $60 million and he has earned that sum of money from his professional career.