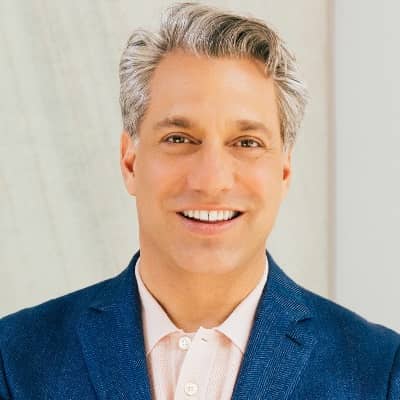 Thom Filicia is now living with his long-time partner, Greg Calejo, a marketing executive. The duo has been together from the time when Thom launched Thom Filicia Home Collection.

Previously, he was in a relationship with The Queer Eye for the Straight Guy co-star, Carson Kressley.  They two maintain a very good relationship as good friends now.

Who is Thom Filicia?

He is best known for playing the role of interior design expert on the American television program titled, Queer Eye for the Straight Guy.

The designer was born on May 17, 1969, in Syracuse, New York, the U.S. He has not revealed anything regarding his family and siblings.

He belongs to American nationality and is of Italian ethnicity.

Talking about his education, he graduated from Syracuse University with a Bachelor of Fine Arts in interior design.

Thom Filicia is one of the popular designers. His collection includes various projects such as the VIP Suite for the USA Pavilion at the World’s Fair in Aichi, Japan, eco-friendly apartment for Riverhouse, Manhattan’s first premium (LEED-certified) “green” luxury condominium tower.

He owns his own collection, Thom Filicia Home Collection. It creates different home furnishings that are exceptional, accessible, and designed in a unique way.

He is also the founder and chief creative officer of New York City-based design firm, Thom Filicia, Inc which was founded in 1998.

Filicia is the author of Thom Filicia Style published in 2008 by Atria/Simon & Schuster. He is also a contributing author of Queer Eye For The Straight Guy: The Fab 5 Guide To Living Better. In November 2012, he published another book for Clarkson Potter Publishers.

Thom was titled for one of Elle Decor’s top 25 A-list Designers in the year 2011. Likely, in 2006, he was also chosen for The House Beautiful’s Top 100 American Designers.

Furthermore, he was has played the cast of the interior design expert in the Emmy-Award winning show Queer Eye for the Straight Guy.

Filicia also performs as host in various shows for the Style Network. It includes shows like Dress My Nest and Tacky House. In addition, Thom also comes on HGTV’s The White Room Challenge as a guest judge.

Being one of the successful personality, his net worth is $15 million. There are no details regarding his earning.

He hasn’t been in any incident that could create any rumors about him and is also far from being in any controversy until now.

Thom Filicia has an average height and weight but its exact measurements are unknown. He has grey colored hair and dark brown colored eyes.

Also, get to know about other popular designers like Christine Baumgartner, Storm Keating, and Marta Domingo.