Thom Tillis is an American politician. He is serving as the junior United States Senator from North Carolina since 2015. 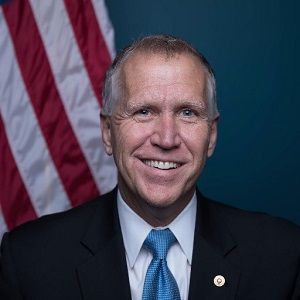 As the former state speaker of the North Caroline House of Representatives, I helped push two landmark bills that protected and expanded gun rights for citizen.

Thom Tillis has been married twice in his life. His first wife was his high school girlfriend. The name of his ex-wife is unknown.

After that, he married his second wife, Susan Tillis. There is no information about their marriage date.

The couple together has two children named Ryan Tillis and Lindsay Tillis. They currently lives in Cornelius, North Carolina.

Who is Thom Tillis?

Thom Tillis is an American politician and businessman. He is serving as the junior United States Senator from North Carolina.

He was born on August 30, 1960, in Jacksonville, Florida, United States. His birth name is Thomas Roland Tillis and has caucasian ethnicity.

He is the eldest son of Margie (mother) and Thomas Raymond Tillis (father). He has three elder sisters plus two younger brothers.

He then joined the University of Maryland University College and graduated with a bachelor’s degree in technology management in 1997.

After university graduation, Thom Tillis began his career as a computer operator at the Provident Life and Accident Insurance Co in Chattanooga, Tennessee. He entered politics in 2002 by serving on the parks and recreation board of Cornelius, North Carolina.

He served as a town commissioner for two years from 2003 to 2005. After that, he ran for the General Assembly in 2006. He defeated incumbent John W. Rhodes and won the election.

After that, he became the campaign chairman for the House Republican Caucus in 2010. Governing magazine named him one of 17 “GOP Legislators to Watch” in May 2011.

In January 2013, Tillis became the Speaker of the House by the Republican Caucus for the second time. In 2014, Thom was the Republican Party’s nominee for the 2014 U.S. Senate election in North Carolina.

On May 17, 2017, Thom participated in a three-mile race but he collapsed and was taken to the hospital. Later, he sent a video from Twitter saying he was doing fine.

In Nov 2020, the election for the US Senate will be held. In this, Thom and Cal Cunningham are nominated for the position.

Thom Tillis: Net Worth and Salary

This politician’s estimated net worth is $1 million.

As per the sources, a senator receives an average salary of around $174k per year.

Many citizens criticized Tillis during the Republican primary campaign in 2014 for raising money for his Senate campaign from groups lobbying the statehouse.

The native people criticized him because that was not allowed because he was running for federal office.