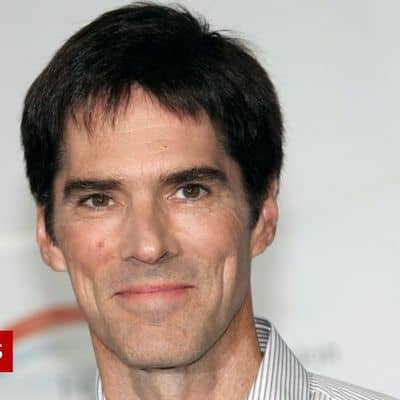 There's nothing better for kids than a bucket and shovel at the beach. I grew up across the marsh from The Citadel. We loved buying chicken necks at the Piggly Wiggly, tying them to a string on a stick and catching blue crabs

Charleston has something for everyone, rain or shine. Its architecture is unparalleled. Carriage rides are great for seeing the city and hearing the history behind certain houses and the area

You know, it's nice on a sitcom to have an audience there, but there's still a wall of cameras between you and them.

What is the relationship of Thomas Gibson?

Previously, he exchanged vows with Christine Gibson on 03 April 1993. He started to date her in the year 1993.

His ex-wife is an actress who was seen in a movie titled Octopussy. But their wedding did not work out as they separated in 2011, then after two years, Gibson filed for divorce.

Their separation was finalized on Feb 14. This former couple has three children, two sons James Parker, Travis Carter, and a daughter Agatha Marie.

Who is Thomas Gibson?

Thomas Gibson is a popular American actor and director. He is popular for his acting skills in Chicago Hope, Dharma & Greg, Criminal Minds, and more.

His upcoming project The Writer’s Bible is under post-production where he is playing the role of The Writer.

His birthdate is 03 July 1962 and he was born in Charleston, South Carolina, the United States as Thomas Ellis Gibson. The name of his mother was Beth with his father was Charles M. Gibson.

His mom was a social worker while his dad was a lawyer.

Thomas’s ancestry is a mix of Irish-Scottish-English-Welsh and has a brother named Charles Gibson.

Regarding his academics, he first went to Little Theater School and then Bishop England High School. From the College of Charleston, he passed out in 1981.

After this, he enrolled at Juilliard School to complete his graduation in Fine Arts.

Thomas Gibson is a popular face of the entertainment world. Till now, he has shown his acting skill in several movies as well as TV shows.

By the recorded reports of 2022, he has accumulated a net worth of around $18 million US. The salary from his acting journey is calculated at $5 million per year.

This Criminal Minds famed actor is keeping himself away from rumors and desperate scandals.

Thomas Gibson’s height is 6 ft 2 inches and her body weight is 85 kg. Similarly, he has dark brown eyes and his hair is also in dark brown color.

Moreover, he is on TikTok with more than 808K fans.