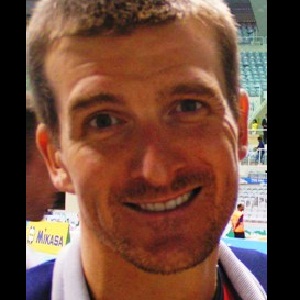 Seven years of dating life turned into a marriage life

Thomas Hoff is a married person. After being in a relationship with Sandy Mora for several years, they finally got married.

The couple is blessed with five daughters. Currently, he is living happily with his wife and resides in the USA.

Who is Thomas Hoff?

He is on the US national volleyball team and plays as a middle blocker.

His father is Richard and his mother’s name is Margaret Hoff.

He was raised along with his older brother Rich and an older sister Jennifer.

Moreover, he also has a degree in B.Sc (Mechanical Engineering).

Thomas Hoff started playing volleyball professionally at Ohio State. There he was a two-year starter or the Buckeyes. Thomas transferred to the long beach in 1994.

Thomas was honored as the most valuable player 2005 Greek Volley League.

Currently, there are no drastic rumors regarding Thomas’s personal and professional life. Also, he hasn’t been a part of desperate controversy yet.

This amazing player has an estimated net worth of $500 thousand as of 2022.

Regarding Thomas Hoff’s body features, he has blue eyes and light brown hair.