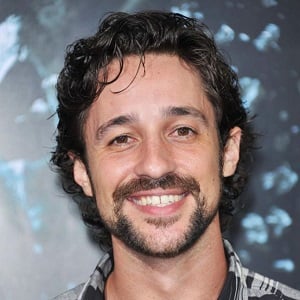 [on American Reunion (2012)] This movie gives us permission to be juvenile in a way the real world doesn't let us be. As actors, how great is it to go back and act like stupid twelve-year-olds again?

[on sharing an exact birthday with fellow singer-actress Jessica Simpson] It's an honor when people say that I must be what her twin brother would look like, if she had one. We've never collaborated, however - and quite honestly, I'm not sure we resemble each other closely enough to warrant the comparison.

Thomas Ian Nicholas is a married man. He is married to Colette Marino (DJ Colette).

They have two children from this marriage, son Nolan River and daughter Zoë Dylan.

However, the pair filed for divorce from DJ Colette in May 2022.

Who is Thomas Ian Nicholas?

People mostly know him for his role as Henry Rowengartner in ‘Rookie of the Year’.

Additionally, he also played the role of Kevin Myers in the ‘American Pie’ film series.

Nicholas was born in Las Vegas, Nevada on July 10, 1980. His mother Marla Nicholas was a professional dancer.

Additionally, he has six siblings. His brother Tim Scarne is a screenwriter.

He developed a keen interest in acting since his childhood years. He is of American nationality.

Furthermore, he belongs to the mixed ethnic background of Italian, German, Irish, and English.

Talking about his education, there are no details available about Nicholas’ educational background at present.

Thomas Ian Nicholas landed his first major role in ‘Who’s the Boss?’ as Little Tony. In 1989, he appeared in the TV series ‘Baywatch’ as Ricky Blount.

Additionally, he portrayed the role of Bobby in ‘Married with Children’.

He played Scootch in an episode of ‘Harry and the Hendersons’ in 1991.

Since then, he has appeared in numerous other movies and television series.

Furthermore, he has also produced several movies and television series. All in all, he has over 55 credits as an actor.

Some other movies and television series that Nicholas has appeared in are ‘Nightmare Shark’, ‘Movie Trivia Schmoedown’, ‘Remember the Sultana’, ‘Living Among Us’, ‘Trailer Park Shark’, ‘Walt Before Mickey’, ‘Red Band Society’, ‘Gormiti’, ‘Delivering the Goods’, ‘American Reunion, ‘Let the Game Begin’, ‘Fading of the Cries’, ‘Sherman’s Way’, ‘Grey’s Anatomy, ‘American Wedding’, ‘American Pie’, ‘Party of Five’, ‘Honey, I Shrunk the Kids: The TV Show’, and ‘A Kid in King Arthur’s Court’ among others.

Nicholas won the Silver Award Of Distinction in 2017 for ‘The Lost Tree’.

Additionally, he has also won the Robert Altman Award and Jury Award at Riverside International Film Festival. All in all, he has 6 wins and 4 nominations to his name to date.

Nicholas has not revealed his current salary.

However, he has an estimated net worth of around $3 million at present.

Nicholas has not been part of any notable controversies in his career.

Talking about his body measurement, Thomas Ian Nicholas has a height of 5 feet 8 inches and has a decent weight.

Additionally, his hair color and eye color is dark brown.

Nicholas is active on social media.

In addition, he has more than 36.9k followers on Instagram.

Similarly, his Facebook page has more than 8.9k followers.