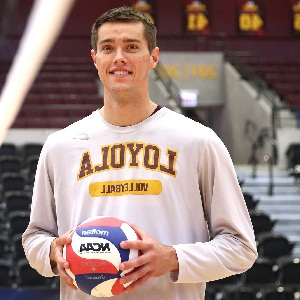 Thomas Jaeschke is in a relationship. He is dating Paige Tapp. She is a national volleyball player for the US.

The couple supports each other during the game by posting cute pictures on their social media handles.

Who is Thomas Jaeschke?

He is mainly known as a member of the United States men’s national volleyball team and Italian club Calzedonia Verona.

Thomas was born to John and Danielle Jaeschke on September 4, 1993, in Wheaton, Illinois, The United States of America.

He was raised along with his twin sister Jaime and an elder brother Joseph(born 1990). Thomas was highly interested in playing volleyball from a very early age and used to spend hours and hours playing.

He along with his team won the 2014 and 2015 NCAA Men’s DI-II National Championships and Thomas was honored as AVCA Player of the Year.

Thomas enrolled in the national team in the year 2015 and played the 2015 FIVB World Cup.

In 2016, Thomas got a promotion to the U.S. Olympic Men’s Volleyball Team and played the 2016 Olympic Games in Rio de Janeiro.

According to the 2020 data, the average salary of an American volleyball player is $39,549. However, his net worth is yet not revealed.

This player has not been part of any notable controversies in his career. Furthermore, at present, there are no rumors concerning his life and career.

Thomas Jaeschke has blue eyes with light hair. He has a height of 6 feet 6 inches and weighs 93 kg.