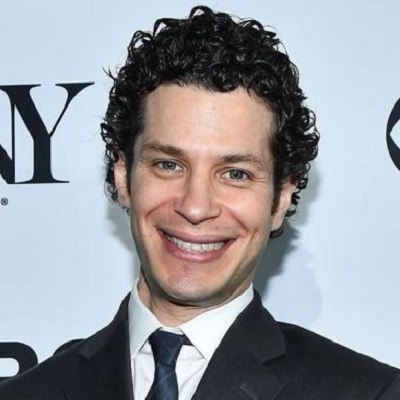 Thomas Kail is married to the actress, Michelle William. They got married secretly in March 2020. They first met at the set of Fosse/Verdon. During the shoot, they started growing attachment to each other.

The couple first announced that they are engaged in December 2019.

Recently, the couple welcomed their child. However, the name, gender, and birth date are not disclosed yet. The child happens to be the first child of Kail and the second child of William. She has a daughter, Matilda Rose Ledger from the actor, Heath Ledger.

Before marrying William, he exchanged vows with an actress Angela Christian. They started dating in 2006. However, they separated in 2019 silently. Also, the reason behind the break up is unknown.

Who is Thomas Kail?

American Thomas Kail is a stage and film director, and producer. He is renowned for his last mini-series, Fosse/Verdon as director and producer.

As of now, he is associated with Hamilton as director and producer.

Thomas Kail was born on the 30th of January 1978 in Alexandria, Virginia. His father, Floyd Kail, and mother, Wendy Kail are of Ashkenazi Jewish ethnicity.

In 1995, he completed his High School Education from Sidwell Friends School. Later, in 1999, he graduated from Wesleyan University.

After graduating from college, Thomas Kail started his career as an assistant manager in American Stage Company in New Jersey.

Moving forward in mid-2000, he started directing the stage acts. Some of the plays include 24 Hour Plays, A Bus Stop Play, and Zusammenbruch in Broadway.

Later, he directed the play, In the heights which became a big hit and also earned a nomination in Tony Awards for the best direction.

Along with plays, he also started directing the TV Projects too. Some of the TV series directed by him include the Jack and Triumph Show, 2 Broke Girls, and Grease Live! His last mini-series, Fosse/Verdon is one of the most accomplished series in his career.

Next, he is debuting as a director with the movie, Hamilton. The movie is the biopic of statesman and politician,  Alexander Hamilton.

Apart from direction, he is equally active in the production too. That includes Fosse/Verdon, The Top Floor, and The Royals.

Through his career in the entertainment industry, he has made a net worth of $30 million. His salary as a director is in the range of $31k – $217k. Also, he makes as a stage direction too.

Apart from that, he also earns through TV production works too.

As of now, he has not been through any sort of controversy and scandal that created a buzz in the media.

Nevertheless, the director is constantly in the headlines in 2019 for his relationship. In December 2019, he and his fiance, Michelle Williams announced that they are engaged now. However, before the time, he was in a long time relationship with the actress, Angela Christian since 2006.

Also, Williams was not a single as she was married to the singer and songwriter, Phil Elverum just a year before in July 2018. After getting a divorce from Phil in April 2019, the couple got married secretly in March 2020. Later, they declared that they are expecting a baby.

Recently, the couple welcomed their child in June 2020. However, they have not revealed the gender and the exact date of birth date regarding the child.