Updated On January 29, 2023 | Published By: prasha singh
Share this
In Relation 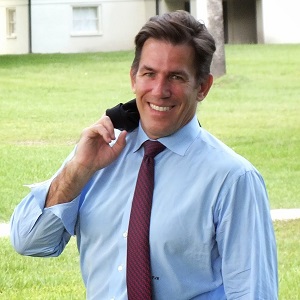 I'm totally changed. I've been emancipated from all this Republican dogma. Whether it's being anti-immigration, being-anti gay, being militaristic and wanting to engage in all these military interventions across the planet. That's all absurd

I have experienced a lot in my life - some good, some bad ­­ - but all of those experiences make up the man I am today.

Ravenel is engaged to his longtime girlfriend, Heather Mascoe on 1st December 2020.

He revealed his relationship status via his social media handles Twitter and Instagram with the caption “happily engaged.” The couple is planning their wedding soon.

Previously, he was married to Mary Ryan Ravenel in the year 1995 for three years. They divorced in 1998.

Then he was in a relationship with Kathryn Dennis, who also appears on Southern Charm, and the couple has two children, Kensington Calhoun Ravenel and St. Julien Rembert Ravenel.

But he still shares a great friendship with his ex-Kathryn and they are seen together along with their children for functions.

Who is Thomas Ravenel?

Thomas Ravenel is a politician and former state Treasurer.

He is one of the cast members of the hit Bravo show, Southern Charm, and is also the former State Treasurer of South Carolina.

He is also a member of the French Huguenot Church in Charleston.

His father, Arthur Ravenel, Jr., was a Congressman from Carolina, and his mother’s name is Louise Rodgers.

He graduated from The Citadel in Charleston, receiving his B.S. in 1985.

Later received his M.B.A. from the University of South Carolina in 1991. His M.B.A. studies were focused on finance and real estate.

Prior to running for office, Ravenel founded the Ravenel Development Corporation, which was a commercial real estate company.

He ran for the US Senate in 2004 and came in third in the Republican primary.

Upon losing his first race, he went on to run for State Treasurer in 2006 and won, but his political career was plagued with scandal.

In June 2007, Ravenel was indicted on federal cocaine distribution charges.

The charges that were filed allege that Ravenel purchased less than 500 grams of cocaine through an intermediary in Charleston in 2005, prior to his election as Treasurer.

Governor Mark Sanford suspended Ravenel from his duties as State Treasurer upon learning of the charges and Ravenel decided to enter a rehabilitation facility.

Thomas Ravenel: Salary and Net Worth

There are no rumors of Ravenel and he has not been involved in any type of controversy.

Furthermore, also find out more about the early life, career, net worth, relationships, and controversies of politicians and former state Treasurers like Kathryn Dennis, Pete Buttigieg, and Andy Levin.