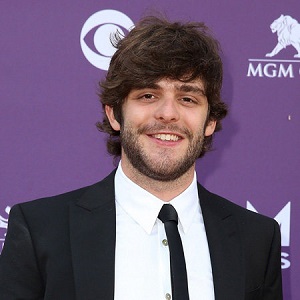 You just have to live today. And I think one of my New Year's resolutions is definitely trying to stop and live in the moment and cherish it.

I rap on 'Front Porch Junkies' and 'Whatcha Got in that Cup.' I try to channel my inner Lil Wayne and Drake. It's fun to be able to freestyle over a country melody and say country words over a rap song.

Dad told me that before I was born, he would put my mom's stomach up to the speaker and play Led Zeppelin.

Thomas Rhett is a married man. He is married to his childhood love, Lauren Gregory. They were friends since first grade. They dated each other for several years before their marriage. After years of their affair, the couple got married on October 12, 2012. They have been married for almost five years now and their relationship is still going fine. In February 2017, the couple announced that they are expecting a baby daughter together and adopting a second child from Africa.

Who is Thomas Rhett?

Thomas Rhett was born on March 30, 1990, in Nashville, Tennessee, USA. He is an American by nationality and is of North American ethnicity.

He is the son of Thomas Rhett Akins, Sr. and Paige Braswell. His father is a famous American country music singer and songwriter. He was raised in an upper-middle-class family. Thomas was influenced by his father. He began playing drums since he was a child.

He then was involved in the high school band called The High Heeled Flip Flops. After finishing high school he went to Lipscomb University in Nashville, Tennessee.

Thomas began his singing career with the high school band called The High Heeled Flip Flops. He dropped out of college when he was 20 to pursue a career in music. After that, an executive from Big Machine Label Group approached him and offered him a publishing deal to write songs. He accepted and began writing many songs for the company. He co-wrote the song “I Ain’t Ready to Quit” on Jason Aldean’s 2010 album My Kinda Party and signed a recording contract with Big Machine Records’ Valory Music Group division in 2011.

Thomas released his first single, Something to Do with My Hands on February 21, 2012. His debut single, Something to Do with My Hands was a massive hit as it also entered into the top 30 of the Hot Country Songs charts. He released his debut album, It Goes Like This on 29 October 2013. In 2015, he won ASCAP Country Music Awards for Most Performed Songs for “Make Me Wanna“. In 2017, he was nominated for the Grammy Awards- Best Country Song for “Die a Happy Man“.  He won the iHeartRadio Music Awards for Country Artist of the Year in 2017.

Thomas Rhett: Salary and Net Worth

He has been a successful singer in his career and he has accumulated a net worth of 5 million dollars but his salary is not revealed yet.

He has a good height of 5 feet 10 inches (1.78m) and his body weight is 73kg. He has brown hair color and his eye color is hazel. There is no information about his shoe size and dress size.

Ashlee Simpson
Tags : Singer-songwriter Something to Do with My Hands Tangled Up
Suggest Bio Update