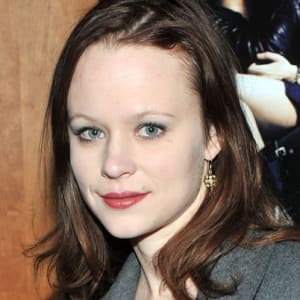 “I admire Jodie Foster. Her head is screwed on really well. It's not loose at all.”

Thora Birch was in a relationship with the American musician Fred Durst in 2002. They could not hold the relationship and they separated. Later, he dated the American TV Host, Bill Maher from 2004 to 2005. Currently, there is no news heard about her relationship status. She might be living single.

Who is Thora Birch?

She was nominated for Bafta Award for Best Supporting Actress for her film ‘American Beauty’.

Birch was born in Los Angeles, California, USA, on March 11, 1982. She is currently 36 years old. Her father’s name is Jack Birch and her mother’s name is Carol Connors. They are former adult film actors and both appeared in the film ‘Deep Throat’. Throughout her acting career, her parents have been her business managers. They were reluctant to encourage her in the entertainment industry.

Her name, Thora, is procured from the name of the Norse god of thunder and lightning, Thor.

She has got a younger brother, Bolt Birch. She holds American citizenship and she has German, Jewish, Italian and Scandinavian ancestry.

There is no information available about her educational history. However, it is under review.

She debuted her film from the science-fiction comedy ‘Purple People Eater’ in 1988, and she won a Youth In Film Award and a Young Artist Award for that movie. She made her guest appearance in the episode of ‘Doogoe Howser, M.D.’ and played Molly in the NBC television series ‘Day By Day’.

Thora played the lead role in the sitcom ‘parenthood’ in 1990 and it aired on NBC but was canceled after one season. She played in the drama ‘paradise’ and later starred in the comedy ‘All I Want for Christmas’ in 1991. She portrayed the role of the daughter of Jack Ryan in the spy thriller ‘Patroit Games’ in 1992. She was featured in the fantasy comedy ‘Hocus Pocus’ at the age of 10, and played in the 1994 comedy ‘Monkey Trouble’.

Thora made her appearance as the younger version of Melanie Griffith character in the film ‘Now and Then’ in 1995 and appeared in the drama ‘American Beauty’ in 1999.

Her other performance in the films include in ‘The Smoker’, ‘The Hollywood’, ‘The Hole’, ‘Ghost World’, ‘Homeless to Harvard: The Lix Murray Story’, ‘Silver City’, ‘Train’, ‘Deadline’, ‘Wniter of Frozen dreams’ from the time period 2000 to 2010.

She played the role of Sidney Bloom in the movie ‘The Pregnancy Pact’ in 2010 and the film was favorably received by critics and was watched by 5.9 million viewers.

She has an estimated net worth of around $8 million and her main source of income is from her professional career.

Thora disappeared from the film industry for a while in the year 2014. It was heard that Birch’s father, Jack, played the key role to end his daughter’s career. He horrified members of the film, The Winter of Frozen Dream crew when he demanded to be on set to watch his daughter film a sex scene with her co-star, Dean Winters. He had a clash with the film’s director over camera angles that he would flatter his daughter and he threated to kill the assistant directors.